Overall, it was a strong quarter, but not as strong as many investors may have anticipated. Let's take a closer look at Electronic Arts' results.

Strong demand for Madden, Battlefront, and FIFA
Electronic Arts' quarter was dominated by video game consoles. Sales of its Xbox and PlayStation games generated 76% of its adjusted revenue, with most of that coming from the newer Xbox One and PlayStation 4. It took two years, but it seems most gamers have finally moved on to the latest consoles. During the quarter, sales of Xbox One and PlayStation 4 titles generated two-thirds of Electronic Arts' adjusted revenue. The older PlayStation 3 and Xbox 360 brought in just 10%. That's a massive swing from last year, when it was 41% and 29%, respectively.

Investors wanted more
So why did Electronic Arts' shares tumble following the release of its earnings report? It may come down to recent trends and expectations.

For its fiscal year 2016, which ends in March, Electronic Arts expects to earn an adjusted $3.04 on revenue of around $4.5 billion. That's slightly worse than analyst forecasts of around $3.10 on revenue of $4.56 billion. 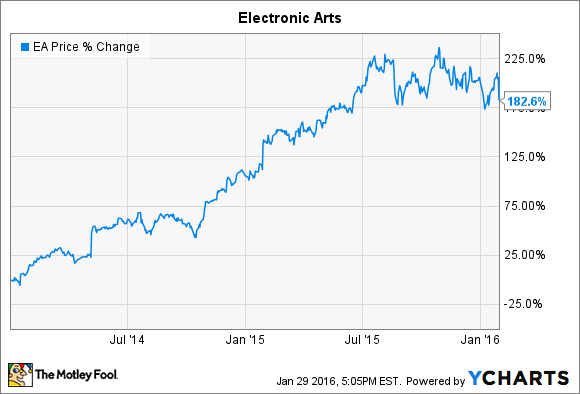 At the same time, its fiscal-third-quarter numbers look weak in the context of its recent past. Even factoring in last week's correction, Electronic Arts' shares have surged over the last two years, rising more than 180% since January 2014. That gain has been fueled by a steady stream of strong earnings reports -- the company has consistently blown away both analyst expectations and its own guidance. Here's what it reported in the last five quarters:

Electronic Arts' recent earnings report still exceeded analyst estimates for earnings but missed revenue projections. Moreover, it beat earnings estimates only narrowly -- unusual given its recent history. Under CFO Blake Jorgensen, Electronic Arts has given consistently conservative guidance, which it has managed to beat handily. In its October 2014 quarter, for example, Electronic Arts earned almost 50% more than it had projected.

Altogether, then, it's not surprising that Electronic Arts' shares sold off. Although the company's quarter was solid, investors simply expected more.