However, Ford disappointed investors with a forecast that its North American profit margin could decline modestly in 2016. This caused the stock to plumb a new multiyear low. (Ford share recovered with the broader market on Friday.) 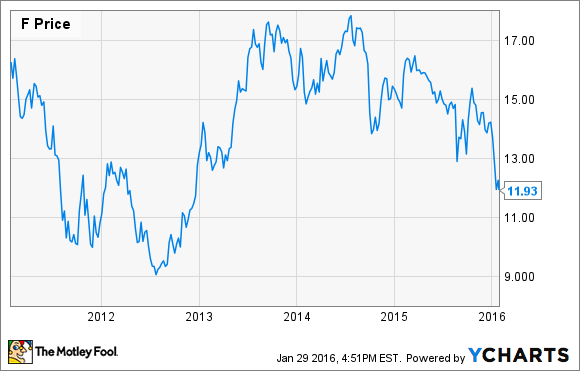 While that implies some potential margin contraction, Ford CFO Bob Shanks reminded investors on the company's conference call that a 9.5% margin is still strong by historical standards.

Why GM can outperform
Some of the headwinds that Ford is facing will also impact General Motors. GM is in the early innings of a period with more new vehicle launches. Product launches tend to depress margins initially due to factors like higher marketing spending. Slowing auto sales growth in the U.S. would also affect GM just as much as Ford.

However, GM has a few advantages. First, its profit margin in North America in 2015 was actually held back somewhat by a glut of used rental cars that GM had to sell at auction.

Second, General Motors could post stronger revenue growth in North America than Ford. GM has been gaining market share at home, but this growth driver was offset by a significant reduction in inventory last year.

In the U.S. specifically, GM reported a vehicle inventory decline of more than 106,000 units during 2015. GM will probably need to reverse at least part of this inventory decrease in 2016. That will help it post faster revenue growth than rivals.

Third, GM will benefit disproportionately from cheap gas prices due to its leading position in the SUV market. General Motors holds about 75% of the large SUV market, and it is working hard to ramp up production of these models to cope with rising demand. The ultra-profitable Cadillac Escalade has seen particularly strong demand, with sales up 18% in the U.S. last year to nearly 36,000.

Expecting outperformance at GM
Since GM's IPO a little more than five years ago, Ford has typically maintained a slightly higher market cap than General Motors. This gap has been narrowing recently, and 2016 could be the year that GM finally overtakes its rival in market value. 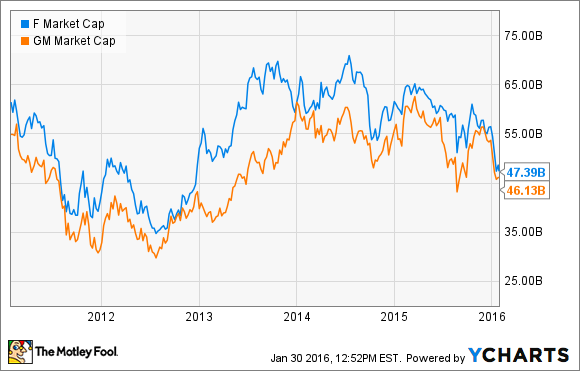 Ford is also on track to have a solid 2016 -- even if profitability eases somewhat in North America -- thanks to improving profitability in some of its overseas markets, especially Europe. But GM is better positioned, with multiple tailwinds that will allow it to squeeze even more profit out of the highly profitable North American market in 2016 and beyond.