Please ensure Javascript is enabled for purposes of website accessibility
Log In Help Join The Motley Fool
Free Article Join Over 1 Million Premium Members And Get More In-Depth Stock Guidance and Research
By Daniel B. Kline – Feb 1, 2016 at 4:30PM

The company often suffers from the category it gets included in, which is not a fair reflection of its business.

Sometimes simply not being the market leader can weigh down a stock, even though no negative news has been delivered. For LinkedIn (LNKD.DL), even though the company has a very different business model than its social media rivals Facebook (META -1.69%) and Twitter (TWTR 0.43%), simply being grouped in that club can hurt it.

What: LinkedIn stock dropped 12% in January, according to S&P Capital IQ data, and nothing specific happened to cause the fall. The company did not report, nor did it issue any major news. Instead, the social media site built around jobs and work was simply caught in a downdraft.

On one side, you had Facebook, the reigning industry titan, which issued a strong earnings report late in the month while also making changes aimed pushing back upstart rival Snapchat. Those moves may have sent a subtle reminder to LinkedIn shareholders that the company is vulnerable should its much bigger rival decide it wants in on LinkedIn's niche.

It's also possible the the ongoing uncertainty at Twitter simply reminded people that any social media plays that are not Facebook have struggled to thrive on a long-term basis. 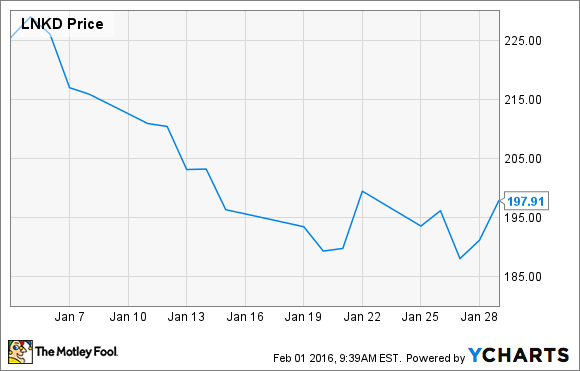 So what: In some ways, LinkedIn is merely a victim of vague market concerns, and in many ways, that's not exactly fair. Yes, Facebook could likely do some real damage if it chose to go after the company's audience, but aside from both being labelled social media sites, the two are not really in the same business.

As my Fool colleague Andres Cardenal pointed out in his article "Will 2016 Be LinkedIn's Best Year Yet?" Facebook (and Twitter) make nearly all of their revenue from advertising, while LinkedIn only earned 18% of its Q3 revenue that way. The company also earned another 18% from premium subscriptions, but the vast majority of its revenue (64%) comes from talent solutions -- essentially helping companies fill jobs.

Basically, while LinkedIn has a lot of social media site functionality, it has more diverse revenue streams, and its fate does not necessarily track with Facebook's and Twitter's.

Now what: LinkedIn reports Feb. 4, and if it meets expectations, its stock will recover. The company has actually become a more diverse company in recent years, including moving into online education by buying Lynda.com and continuing to pursue non-advertising growth strategies. As long as the results of those efforts continue to pay off -- as they did in Q3 -- then the periodic fears that Facebook will steamroll them because social media is somehow Highlander (there can be only one) will lessen for a while.

Daniel Kline owns shares of Facebook. He is on Facebook. Twitter, and LinkedIn, but draws the line at Snapchat. The Motley Fool owns shares of and recommends Facebook, LinkedIn, and Twitter. Try any of our Foolish newsletter services free for 30 days. We Fools may not all hold the same opinions, but we all believe that considering a diverse range of insights makes us better investors. The Motley Fool has a disclosure policy.