Please ensure Javascript is enabled for purposes of website accessibility
Log In Help Join The Motley Fool
Free Article Join Over 1 Million Premium Members And Get More In-Depth Stock Guidance and Research
By Daniel Sparks – Feb 2, 2016 at 10:05AM

Facebook's Q4 financial results were impressive. But its continued user growth arguably makes the best case for the health of the company's business.

Facebook's (META -0.74%) huge quarter last week served up a range of impressive figures, but its 3% sequential growth in monthly active users, or MAUs, wasn't one of them -- at least on the surface. After all, we're talking about a company that managed to grow revenue by 30% sequentially and 52% year over year.

These are some big figures, and they make a 3% growth rate look comparatively small. But a little bit of context proves this single-digit growth rate in users is really much more impressive than it appears at first glance. 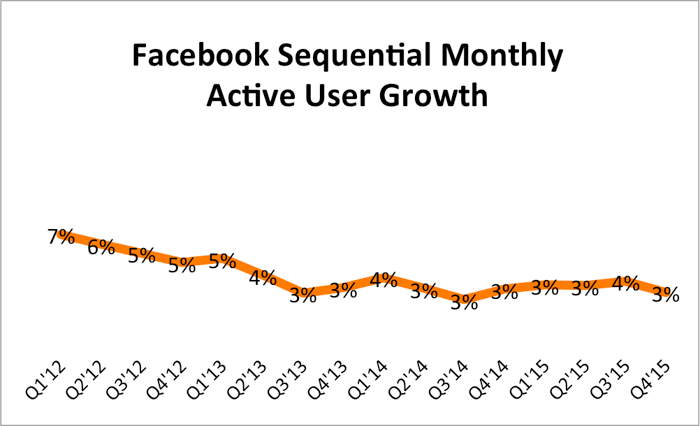 Or here's another way to look at user growth -- and this is where it really becomes evident just how significant the social network's recent growth in MAUs is. During the entire year, Facebook added nearly 200 million monthly active users, growing MAUs by 14%.

And for some final context: Today, Facebook now boasts 1.59 billion MAUs, or about one MAU for every five people on the planet.

The value of Facebook users
What's particularly notable about Facebook's user base, however, is how valuable these users are.

To understand the value of its MAUs, investors should realize that 65% of MAUs use the platform on a daily basis. In other words, Facebook has over 1 billion daily active users, or DAUs. Facebook refers to this ratio of DAUs to MAUs as engagement. The higher the metric, the more engaged Facebook's user base is, the company contends. This engagement rate of 65%, which is higher than in any year prior, in Q4 was sustained for the entire year.

Of course, Facebook investors want more than engagement. They want these users to be generating revenue for the company. On this front, Facebook is performing exceptionally well. Consider the company's advertising revenue per user in Q4 of $3.60, which is up 37% from the year-ago quarter.

Replicating success with user growth
Investors are counting on Facebook to replicate its success in growing its user base on its other, newer platforms, such as Instagram, WhatsApp, and its now-separated Messenger. While the market may not expect these platforms to ever catch up to Facebook's core native platform, there are undoubtedly high expectations for their growth over the long haul.

So far, it's looking like Facebook is successfully growing these other platforms. Instagram, WhatsApp, and Messenger, now boast about 400 million, 1 billion, and 800 million MAUs, up from about 300 million, 700 million, and 500 million, respectively, just one year ago.

Facebook's financial performance in 2015 was undoubtedly impressive. But it's the company's continued ability to attract, keep, and engage users that arguably makes the best case for the health of its business.