Please ensure Javascript is enabled for purposes of website accessibility
Log In Help Join The Motley Fool
Free Article Join Over 1 Million Premium Members And Get More In-Depth Stock Guidance and Research
By John Bromels – Feb 3, 2016 at 10:15AM

GM has made three big bets on the future in the past month. Is this good for investors or too many eggs in one basket?

Even riskier than this paint job! Image source: GM.

General Motors (GM -2.68%) should be in a great place right now. Sales are up, earnings are at record levels (up 55% in the last quarter alone), and low fuel prices are encouraging customers to buy big vehicles, GM's most profitable products. But the stock has been falling over the past year, down almost 15% this month alone. Rival automaker Ford (F 1.21%) isn't faring any better: 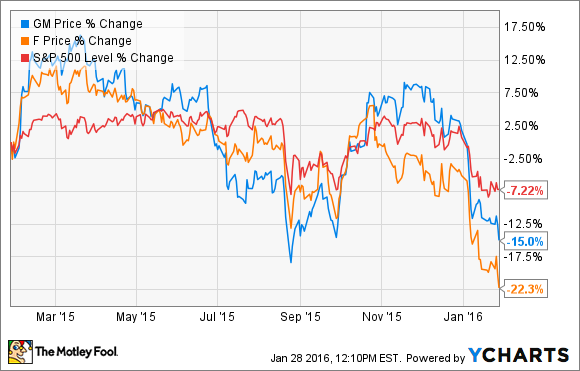 So despite its apparent recent earnings success, GM isn't just resting on its laurels promising "more of the same."

Instead, the company is clearly anticipating a very different auto market in the future and has recently made some big (and risky) bets on where that market is heading. These efforts might pay off big -- or flop hard.

Bet No. 1: Half a billion dollars on Lyft
On Jan. 4, GM announced that it had taken a half-billion-dollar stake in ride-sharing company Lyft, the main competitor to Uber. The two companies are launching a partnership to make GM rental vehicles available to Lyft drivers in select cities. But that's just the beginning. Down the line, the companies envision an "Autonomous On-demand Network" of on-call fleets of autonomous taxis taking riders where they want to go. Basically, a Lyft without drivers.

The potential advantages for GM are huge. GM would be able to park fleets of Lyft vehicles at their dealerships across the country, which could earn revenue for the company even when they're not being shown or test-driven. Also, if you're looking to buy a driverless car, you may be more likely to buy a model you've already ridden in.

The downside to this good idea: it's so good that a lot of other companies want to get in on the action. Rumors abound that Ford is going to develop a similar partnership with Alphabet (GOOG -0.19%) (GOOGL -0.21%). Google itself may be planning to make a driverless taxi service a stand-alone company this year.

The competition means that GM will probably need to make significant investments in this technology, with no guarantees that it will emerge as a major player. Fortunately, as a company with a $46 billion market cap, it has the resources to invest here.

Bet No. 2: Buying the remnants of Sidecar

If you haven't heard of Sidecar Technologies, you're not alone: The ride-sharing pioneer was quickly eclipsed by competitors Lyft and Uber. It made a brief foray into on-demand delivery services for restaurants and other businesses (including marijuana dispensaries) before finally shutting its doors last year.

GM paid an undisclosed amount for the company's technology and most of its assets, including a license to Sidecar's 2002 patent for a "system and method for determining an efficient transportation route." Sidecar executives claimed this patent covered essential ride-sharing technology. In fact, Sidecar co-founder Sunil Paul called this "the key component to the transaction."

If this patent is indeed valid and critical to ride sharing, it would be a huge asset to GM. But that's a big if, and going down the rabbit hole of costly patent litigation could also be a huge boondoggle for the company.

GM could also be eyeing the company's delivery model as another service it can offer with its fleet. This has some intriguing possibilities, but there's been very little development or discussion of this aspect of ride-sharing technology.

Maven will debut in Ann Arbor, Mich., and Chicago in the U.S., as well as in Berlin and Frankfurt in Germany. Additional expansions are anticipated later this year.

Here again, though, GM is entering a crowded field. Ford is developing a combined car- and ride-sharing program called FordPass, built around a smartphone app. Daimler's Mercedes-Benz is doing the same with its Mercedesme program.

Car-sharing is a risky proposition, to say the least. Zipcar's brief and disastrous time as a public company shows how hard it can be. But Maven isn't likely to be an expensive experiment, at least. GM already owns the cars, so if initial results aren't positive, the company can easily wind down the program and focus on other areas.

The Foolish bottom line
Between autonomous vehicles and ride sharing, the fundamental nature of vehicle ownership is changing rapidly. Companies such as GM, Ford, and Google are wise to try to stay abreast of the changes and invest in the market's future.

With established car companies, innovative tech companies, and disruptive start-ups all competing in this space, it's anyone's guess where things will be in one year, let alone five. True, there isn't any existential danger to any of these big companies if these early investments don't pan out...at least, not yet. But it could affect their future fortunes when driverless vehicles finally move from the test track to the showroom.

You should think twice before investing in any one company to capitalize on this emerging market. However, you'll want to keep an eye on how well all three of these companies execute their driverless strategies and be ready to buy when a clearer winner begins to emerge.