Please ensure Javascript is enabled for purposes of website accessibility
Log In Help Join The Motley Fool
Free Article Join Over 1 Million Premium Members And Get More In-Depth Stock Guidance and Research
By Daniel Miller – Feb 3, 2016 at 11:06AM

The automaker's financing arm, Ford Credit, carries a lot of debt, but it's one of the company's greatest assets.

Investors could easily get caught up in a number of very impressive figures from Ford Motor Company's (F 2.18%) fourth quarter. For instance, the automaker's record full-year pre-tax profit of $10.8 billion, a $3.5 billion increase from 2014. Or Asia-Pacific's best-ever annual profit. Or Ford Europe's annual profit, which comes after years of losses -- though the latter development is partially due to a change in pension accounting.

However, one thing investors tend to overlook is the importance of Ford Credit. Let's shine some light on the strong performance from Ford's financing business, which continues to be a competitive advantage for the company.

Don't get caught up in debt
Investors have to throw the standard notion of debt being a bad thing out the window when looking at Ford Credit. That's because Ford Credit essentially acts as a bank, and when banks take on debt, they make a business out of turning a profit on it. Ford Credit works in a similar way: The more debt it takes on, the more consumers it can finance, and the more liquidity it can provide to dealerships.

Ford Credit's debt moved $15 billion higher from 2014 to 2015, to a total of $120 billion, which makes Ford's total debt seem catastrophic -- but it's not. Investors need to remember that Ford's automotive debt of $12.8 billion should be considered separately from its total debt, which, as I mentioned, includes Ford Credit's debt.

With all of that said, here's a look at how Ford Credit's metrics increased right along with its debt. Its contract volume rose from 1.9 billion to 2.1 billion, and its managed receivables bounced from $113 billion during 2014 up to $127 billion last year. That enabled Ford Credit to generate over $2 billion in pre-tax profits last year. If you're wondering, that officially makes Ford Credit the automaker's second-most-profitable entity when compared to automotive regions. 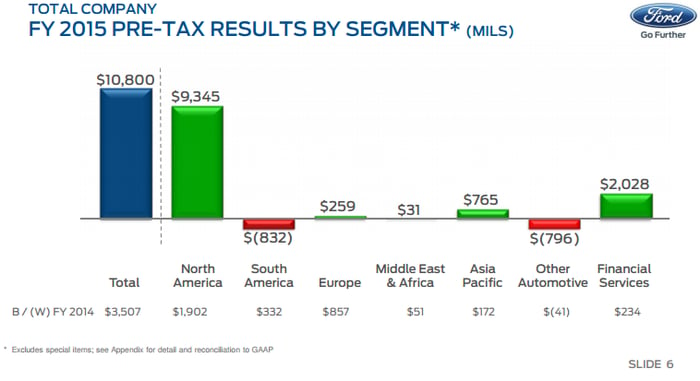 Investors also don't need to worry that Ford Credit's growth might come from serving more loans to consumers with poor credit, as Ford Credit's average placement FICO score remained at 740 during 2015. Furthermore, its over-60-day delinquencies declined from 0.14% in 2014 to 0.12% last year.

Ford Credit remains a strategic asset to Detroit's second-largest automaker. That's because, if you remember, General Motors (GM 1.86%) was forced to sell its finance division as a part of its government-structured bailout. General Motors has since purchased another banking entity and has put a renewed focus on growing it to rival Ford's financing arm, but it's at least a few years away from building that into anything comparable to Ford Credit. For comparison, during 2014, General Motors Financial (GMF) generated $800 million in EBT-adjusted on $41 billion of earning assets, while Ford Credit took in $1.8 billion in pre-tax profits on $113 billion in managed receivables. GM management has said they are aiming for GMF to more than double its EBT-adjusted earnings by the end of 2018, but that would still trail Ford Credit's financial performance from this year.

Lastly, Ford Credit ended the full-year funding plan, which enabled it to record liquidity of $23.5 billion, and its fourth-quarter and full-year losses remain at the low end of Ford Credit's historical performances. Management expects Ford Credit to produce similar -- or even better -- results for 2016. That's something investors shouldn't overlook as they consider Ford's second-most-profitable entity.