Facebook's introduction of its Live product eats into Twitter and Snapchat's ideal use cases.

However, never one to be outdone, Facebook is preparing to roll out a new product that seems likely to put further pressure on rivals Twitter and Snapchat.

Coming to a news feed near you
In a blog post published last week, Facebook announced that it had rolled out its Live video streaming product to all its iPhone users in the U.S., with plans to launch Live globally in the coming weeks. Facebook also promises to make the product available to all Android users, which tend to skew international anyway, eventually without offering much more in terms of details.

Facebook began beta testing Live among a small subset of its U.S. users with iPhones in early December, as part of its broader mobile app redesign efforts. 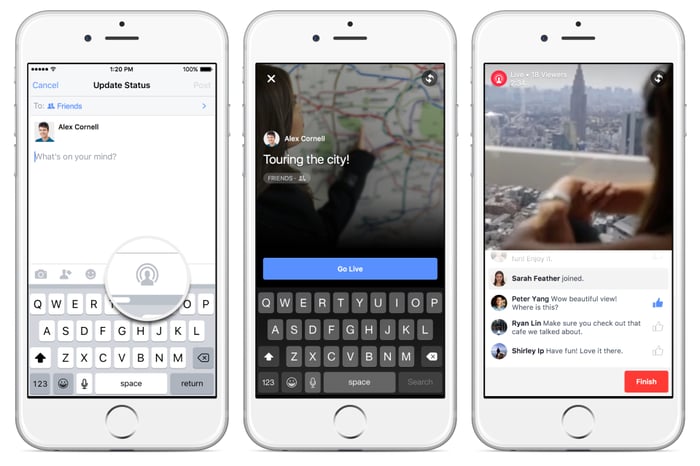 Having experimented with it a few times now, I can say Facebook's live video offering is quite intuitive. The functionality is built directly into the app's Status Update page, a fact I was able to locate even before reading the instructions in Facebook's Live rollout blog post. So while it isn't clear what degree of traction Live will produce among Facebook users, this move presents a clear and present danger for the likes of Snapchat and, particularly, Twitter.

In Facebook's crosshairs
Tech investors occasionally cite user attrition from competing services such as Snapchat or Twitter as possible tail risks to Facebook's social-media supremacy. And though all social networks live and die by their user bases, a clear trend that has Facebook layering elements of other social networks onto its own platform should help protect against this long-tail risk factor.

For Twitter, having Facebook add Live mirrors the core technology powering its live video Periscope subsidiary, which it acquired early last year for just under $100 million. Indeed, many, myself included, viewed Periscope as a potential point of differentiation for Twitter's ongoing product overhaul process, though it bears noting that live video streaming technology had existed long before Periscope.

Especially considering Facebook's far larger user base, its inherent orientation toward sharing among one's own social network, and its ongoing courtship of influencers that originally put Twitter on the map, Facebook's intentions to kill Twitter are becoming more apparent by the day. I've voiced my intrigue about Twitter's newly discounted stock as an opportunity should its product overhaul reignite meaningful user growth. However, the looming specter of having a larger, better-funded competitor such as Facebook target Twitter has made me reconsider my stance.

Beyond Twitter, Facebook's introduction of Live probably threatens video-sharing giant Snapchat, though to a far lesser extent. Before Facebook pushed Live into its iPhone app, Snapchat was arguably the best social-media product for sharing videos in close to real time with your friends. Granted, Snapchat's vanishing videos set it at odds with Facebook, but Live now gives users who aren't concerned with the permanence of a video or picture a new channel to achieve similar social interactions.

Because of the companies' core differences, I don't necessarily see Facebook's expanding Live as direct a threat to Snapchat as I do Twitter, but it's still worth noting for social-media investors and enthusiasts. So while this story remains in its relative infancy, Facebook's continued layering of features from other social networks into its own product could become one of the most important trends shaping this new media paradigm in the years to come.