Please ensure Javascript is enabled for purposes of website accessibility
Log In Help Join The Motley Fool
Free Article Join Over 1 Million Premium Members And Get More In-Depth Stock Guidance and Research
By Travis Hoium - Feb 4, 2016 at 11:15AM

Given the pressures it's facing and the transformation it's undertaking, the better question may be, should its shareholders really want it to?

Duke Energy (DUK 0.64%) is in the midst of transforming itself from a traditional utility with a regulated arm and a non-regulated arm filled with fossil fuel plants into a utility of the future. It recently sold some power plants, it bought a natural gas distributor, and it's planning to spend billions on renewable energy.

As we look ahead into 2016, does this transformation set up investors for a rising dividend?

Payouts are already high
The challenge for Duke in raising its dividend right now is that its already consuming a large percentage of the company's income. You can see in the chart below that the dividend has grown 10% over the last five years while earnings have flattened out. The payout ratio, or the dividend divided by earnings per share, has risen to 93%, a very high percentage of earnings. 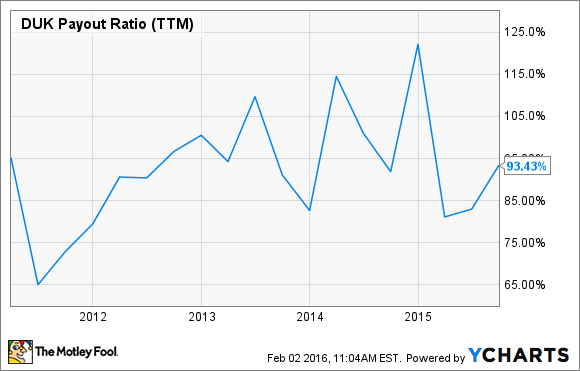 So, any question about whether or not Duke will be raising its dividend further must start with the question, will it be growing earnings? And that's not straightforward to answer for Duke Energy right now.

Can Duke Energy grow?
The problem for Duke Energy in the near term is that demand growth for electricity in its regulated markets are terrible. After the third quarter, rolling 12-month retail sales volume growth was just 0.3%. Residential sales were down 0.2%, despite it having 1.3% more customers in the period.

Warm weather, energy efficiency, and the growth of rooftop solar have become both short-term and long-term challenges for the company, and those trends don't appear to be receding. The Carolinas and Florida, in particular, have been fairly insulated from the growing residential solar boom, but that's likely to change in the next few years as customers fight for the ability to generate their own electricity (especially in Florida).

This dynamic is what drove Duke Energy to buy Piedmont Natural Gas (NYSE: PNY), a deal that's expected to close by the end of this year. That'll give the company some exposure to growing natural gas consumption and diversify it away from electricity. But with it facing so many rising challenges in its regulated electric utility business, I'm not sure the Piedmont acquisition will be enough to bring Duke significant growth.

Is now the time to raise the dividend?
All things considered, I don't think now is the time for Duke Energy to raise its dividend. Demand is weak, it's in the middle of the Piedmont buyout, and with the market moving toward natural gas and renewables, it will need billions in capital to execute its strategy. With $43 billion of debt already on its balance sheet, it may be time for Duke to start deleveraging and taking a more conservative approach to its business before it starts having to add debt just to pay its dividends.