It's been a rough couple of months to be an investor in Regeneron Pharmaceuticals (NASDAQ:REGN). While the company itself continues to fire on all cylinders and looks to have an exciting year ahead, the market has frowned upon anything related to the biotech sector recently, and Regeneron hasn't been able to sidestep the carnage. Shares have now fallen more than 32% from their summertime highs. 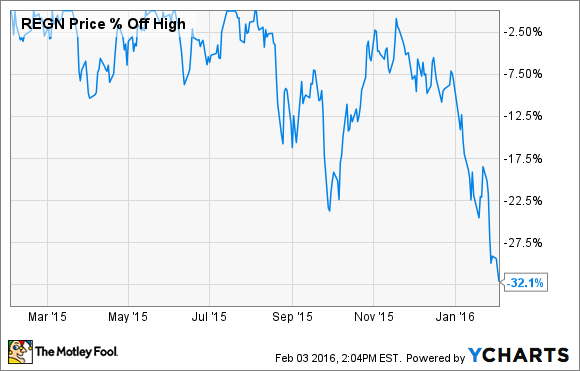 You can bet that Regeneron's management team hasn't been happy with its share price performance over the past few months, so it will probably do everything in its power to throw up another healthy earnings report when it releases results on Feb. 9.

When that reports hits the wire, here are the three things I'll be looking at.

No. 1. Eylea's sales
Sales of Regeneron's blockbuster eye-disease drug Eylea have been nothing short of fantastic. In its last quarterly report, sales of Eylea grew 53% to $1.1 billion worldwide, surpassing the $1 billion mark for the first time. Eylea's growth was even faster stateside, as it grew 65% to $734 million during the quarter.

Management credited the huge growth with its success in treating diabetic macular edema and macular edema following retinal vein occlusion, where it continues to gobble up market share. Management predicted that U.S. sales of Eylea would grow between 50% and 55% versus the year ago period. To help put that number in perspective, on its first conference call of 2015 management predicted that Eylea would grow between 25% to 30% year over year. Put simply, Eylea's performance has been nothing short of stunning.

No. 2. The Praulent rollout
In the third quarter Regeneron and its collaboration partner Sanofi (NASDAQ:SNY) won regulatory approval in the U.S. and EU for their new PCSK9 inhibitor Praluent. As of November, the companies reported that over 4,000 prescribers have submitted prescriptions to their reimbursement hub called MyPraluent, showing that there is huge interest in the cholesterol-reducing drug.

However, since Praluent only recently launched, it does not yet enjoy broad reimbursement. So, during its first few weeks on the market Sanofi was only able to sell $4 million worth of the product. Regeneron and Sanofi both believe that as reimbursement comes online that Praluent sales will grow rapidly, but in the meantime they warned that sales figures might not be the best way to judge the drug's performance.

In addition, Sanofi and Regeneron are offering samples and free product to patients who want to get on the drug but do not have insurance yet, which could also affect sales results.

Investors should listen in for any new insurance wins and to see if the company provides any more details about its European launch.

No. 3. Pipeline updates
Regeneron has built out an impressive pipeline of products that are aimed at treating a huge variety of diseases such as osteoarthritis and atopic dermatitis. Currently, Regeneron counts four compounds that are in phase 3 clinical trials and another nine that are in earlier stages of clinical development, but I'll have my ears open for updates on two of them in particular.

First is sarilumab, a compound that Regeneron developed alongside Sanofi as a potential treatment for moderate to severe rheumatoid arthritis. Sarilumab has already been submitted for FDA approval, and it has a PDUFA date of Oct. 30, so we still have some time on our hands before we'll hear whether regulators give it the thumbs up or not. The potential for sarilumab looks huge, as the rheumatoid arthritis market currently rakes around $18 billion in annual sales. If sarilumab can find its way to market, Regeneron could have another blockbuster on its hands. Management might not have much to say about the drug on the conference call given that it's pending approval, but investors should still have their ears open to see if the agency has given Regeneron any feedback on the submission.

The other big drug to listen in for updates on is Dupilumab, an investigational compound that could help treat chronic sinusitis with nasal polyps, asthma, and atopic dermatitis.  Analysts believe the drug could bring in peak sales of more than $2.5 billion a year, but Regeneron has yet to release a timeline for regulator submission. Investors should listen in to see if the company is finally willing to release a timeline.