Please ensure Javascript is enabled for purposes of website accessibility
Log In Help Join The Motley Fool
Free Article Join Over 1 Million Premium Members And Get More In-Depth Stock Guidance and Research
By Adam Levine-Weinberg – Feb 5, 2016 at 10:45AM

An expected slowdown in aircraft deliveries this year is just a blip on the radar.

Shares of Boeing (BA -2.99%) have plunged about 15% year to date, including a 9% drop on the day of its Q4 earnings report last week. Clearly, investors are focused on Boeing's announcement that it will cut production of the 777 jet in early 2017, as well as its guidance that the commercial airplanes division will deliver fewer planes in 2016 than in 2015. 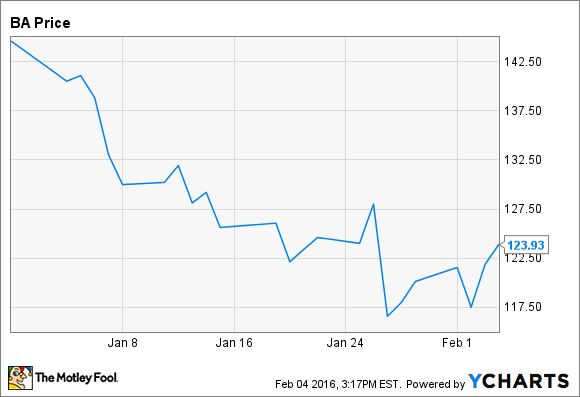 However, the outlook is much brighter than it may appear. While deliveries will probably be down in 2016, Boeing is primed for strong growth thereafter. Five years from now, Boeing could be approaching a major milestone that has never been reached in the commercial aircraft business: delivering 1,000 planes in a year.

737 production will rise
In terms of sheer sales volume, the Boeing 737 far outstrips any of the company's other models. While it sometimes draws unfavorable comparisons to the rival Airbus (EADSY -1.71%) A320 family, Boeing's 737 has sold extraordinarily well in recent years.

Just last year, Boeing secured 588 net firm orders for the 737 family. That gave it 4,392 unfilled orders at the end of the year. It's true that Airbus ended 2015 with more than 5,500 unfilled orders for the A320 family, but that includes some suspect orders. In any case, Boeing's backlog is enough to keep the production line running for more than eight years at its current rate.

Finally, on Boeing's earnings call last week, CEO Dennis Muilenberg said the company would raise production again to 57 per month in 2019. That's around the same time that Airbus plans to increase A320 family production to 60 per month. As a result of all these rate increases, annual production (and deliveries) of the Boeing 737 will rise to about 684 units by 2020.

Widebody deliveries will also rise
Boeing's widebody output will also rise over the next five years or so. The company is currently in the process of increasing the 787 Dreamliner production rate from 10 per month to 12 per month. Boeing plans to boost 787 production to 14 per month before the end of the decade. Thus, by 2020, it will be building about 168 Dreamliners each year.

Production of the older 767 is also scheduled to increase in the next two years to meet demand for freighter and tanker variants from FedEx and the U.S. military, respectively. By the end of 2017, Boeing will be building 2.5 per month -- or 30 per year -- up from 1.5 per month today.

For the 777, another key model for Boeing, the future is murkier. In the short term, Boeing is cutting production from 8.3 per month to 7 per month. However, the company has also applied for permits to raise production as high as 10.4 per month by 2021.

Boeing has cautioned that getting these permits is just a precaution, and there is no firm plan to increase production. Yet it has already racked up 306 orders for the next-generation 777X, with four years to go until its scheduled entry into service in 2020. If the backlog grows significantly in the next few years, it might make sense for Boeing to ramp up 777 production to 10.4 per month, which would translate to about 125 aircraft per year.

The 747 jumbo-jet's potential sales volume is even less clear. Boeing is slashing 747 production to just 0.5 per month to cope with a lack of new orders. However, Muilenberg sees potential replacement demand for 240 large freighters in the period beginning around 2019. If this demand materializes, Boeing could return to producing at least one or two 747s per month.

Based on this outlook, it's not clear whether Boeing's commercial aircraft production will reach 1,000 planes per year by 2021 -- but it will probably be very close. This represents a substantial growth opportunity relative to the 762 planes Boeing delivered last year.

What's more, most of the production increases needed to reach 1,000 jets per month are already scheduled and backed up by plenty of firm orders. Boeing's steady growth and rising cash flow should drive the stock much higher over the next five years.

Adam Levine-Weinberg owns shares of The Boeing Company. The Motley Fool recommends FedEx. Try any of our Foolish newsletter services free for 30 days. We Fools may not all hold the same opinions, but we all believe that considering a diverse range of insights makes us better investors. The Motley Fool has a disclosure policy.