In another sign that conditions in the energy industry have gone from bad to worse, LINN Energy (OTC:LINEQ) announced that it is exploring strategic alternatives. In doing so it has retained advisors to help it evaluate its options. In addition to that, the company maxed out its credit facility, borrowing the $919 million remaining under its borrowing base. It's an ominous sign for investors that LINN Energy might not make it through the downturn in its current form.

LINN Energy spent much of the past year working to improve its financial position after borrowing heavily to acquire oil and gas assets when commodity prices were higher. While the company made some progress, lopping off a net $1.8 billion in debt, that simply hasn't been enough to put it on the path toward long-term financial stability given that commodity prices continue to weaken and might not improve any time soon. Worse yet, those weak prices combined with the overall financial stress within the industry, have significantly deteriorated the capital markets leaving LINN with little flexibility to address its financial issues.

Because of that the company is joining other highly leveraged companies like Chesapeake Energy (OTC:CHKA.Q) in seeking the help of a financial advisor. The overarching goal is to improve the company's financial situation so that it can, as CEO Mark Ellis put it, "position LINN for long-term success." That being said, there are a variety of options on the table ranging from assets sales to a pre-packaged bankruptcy, with the latter a very real possibility at the moment. The fact that the company exhausted its credit facility is a possible hint that it does indeed plan to seek bankruptcy protection. That's because that facility would likely have been redetermined lower this spring by its banks due to it being backed by the value of LINN's oil and gas reserves, which continue to fall alongside commodity prices.

What might LINN do next?
Given the turmoil in the energy industry right now, LINN Energy doesn't have a lot of options. There are few deep pocketed buyers that would want to take on the company's financial burdens, which pretty much takes a merger off the table. At best, the company could sell assets to reduce its debt, which is what's weighing on its equity value. In this case there are a number of private equity funds that have cash to put to use. That being said, they might be waiting for LINN and others to declare bankruptcy to then buy these at fire sale prices.

As it stands right now, unless oil and gas prices rebound sharply in the very near term, selling the company off piece-by-piece is the only way current investors will be able to recoup much, if any, of their investment given how dire the situation has become. Further, if the company did take that approach it would likely also abandon the upstream MLP format and convert to a C-Corp with what assets remain. It wouldn't be the first time this happened with MLPs in the 1980's abandoning the format after the deep downturn in that decade. Apache (NASDAQ:APA), for example, was a champion of the upstream MLP sector back in those days but was forced to abandon the structure when prices plunged. It ended up splitting into two, with the Apache we know today being the main surviving entity.

If the company, on the other hand, does decide that its only course of action would be to declare bankruptcy then it's game over for investors. Worse yet, it would likely send shockwaves through the industry and could take other highly leveraged companies like Chesapeake Energy down with it. Both Chesapeake Energy and LINN have nearly $10 billion in debt, with asset bases that are sinking with commodity prices: 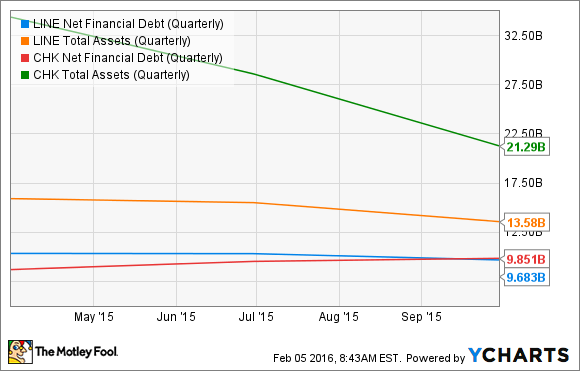 Investor takeaway
It doesn't look good for LINN Energy, which really doesn't have a lot of options right now. The drop in the price of oil has been much deeper and has lasted much longer than anyone in the industry could have predicted, which is really exacerbating the problem. It's growing far more likely by the day that LINN Energy isn't going to make it through the downturn in its current form.