Microsoft (NASDAQ:MSFT) recently open-sourced CNTK (Computation Network Toolkit), its artificial-intelligence framework that powers Cortana and Skype's speech-recognition engines. This means that anyone can now view, modify, or use Microsoft's code in their own software. CNTK is a framework for "deep learning", which helps machines understand human speech and recognize images by imitating the functions of a human brain. 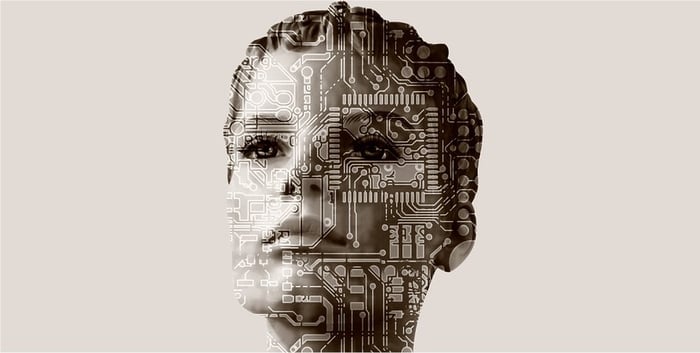 Tech giants like Microsoft, Alphabet (NASDAQ:GOOG) (NASDAQ:GOOGL), Amazon.com (NASDAQ:AMZN), and Facebook have all invested heavily in this market over the past few years. But more recently, these tech giants have all started open-sourcing their platforms to expand their applications beyond their first-party services.

Last year, Google open-sourced its AI framework, TensorFlow, which powers the voice-recognition capabilities of Android and its core search engine. Amazon open-sourced the machine learning engine that powers its shopping recommendations, and Facebook open-sourced custom hardware designs to run its latest AI algorithms. Let's discuss how these growing AI ecosystems can help these tech titans expand their influence over machines in the near future.

How Microsoft could beat Google
Microsoft has a big advantage over Google in the AI race -- CNTK can access more computing power than the open-source version of TensorFlow. CNTK can utilize multiple servers simultaneously, which matters because single computers or servers lack the horsepower to process AI apps in real-time for millions of users.

Google's internal version of TensorFlow accesses thousands of servers at a time, but the open-source version doesn't support such functionarlity. In fact, few open-source AI frameworks support multiple servers out of the box, but developers can add that ability with open-source solutions such as Torch.

Microsoft claims that its internal tests show that CNTK is more efficient than rival open-source frameworks such as TensorFlow. CNTK is also one of the few frameworks that support Windows natively. CNTK only supports C++ and its own custom language for now, but Microsoft plans to add support for popular programming languages such as Python in the near future. Since CNTK is now open source, developers will probably add support for their favorite languages as well.

Why does this matter to Microsoft?
At first glance, open-sourcing an AI framework instead of selling licenses might not make financial sense. However, it's a smart way to lay out the foundations for an ecosystem expansion that could generate higher cloud revenues in the future.

In Microsoft's "One Windows" strategy, universal apps play a key role in blurring the lines between mobile devices, PCs, and gaming consoles. If CNTK makes it easier to develop Windows-compatible apps with built-in deep learning capabilities, more developers in that field would be inclined to create apps for the Windows 10 ecosystem. If those developers tether those apps to Bing, Skype, or Cortana, they could help Microsoft's ecosystem grow against competitors.

Another aspect to consider is CNTK's integration into Microsoft's cloud platform, Azure. Last month, Microsoft chief speech scientist Xuedong Huang said that combining CNTK and Azure GPU Lab enabled the development of deep neural nets for Cortana's speech recognition that were "up to 10 times faster" than its previous deep learning system. Based on that statement, pairing CNTK with Azure services could yield impressive results for AI developers.

Challenging Amazon in the cloud
Last year, Microsoft declared that it would generate $20 billion in annual cloud revenue by the end of fiscal 2018. Last quarter, Microsoft reported that its commercialized cloud annual run rate had topped $9.4 billion. During its most recent conference call, Amazon stated that the run rate of its cloud platform AWS had nearly reached $10 billion.

While that might seem as if Microsoft has a chance of overtaking AWS, most of its cloud revenues came from SaaS platforms such as Office 365 and Dynamics CRM. A much smaller portion comes from Azure, which directly competes against AWS in the hybrid IaaS/PaaS ("cloud platform") market. Microsoft stated that Azure revenues rose 140% annually last quarter, but it didn't disclose an exact sales figure. Last October, Forrester Research estimated that Azure was significantly smaller than AWS with an annual run rate of just $1.6 billion.

The integration of CNTK and Azure might boost that run rate and encourage the creation of "smarter" Windows apps. However, Amazon's own AI solutions -- which can process data from connected devices and help companies make smarter business decisions -- are quickly evolving as well.

The AI arms race will continue
Over the next few years, this "AI arms race" will probably escalate. Each company will use its AI platform for slightly different purposes, but each framework will become better at recognizing images, videos, and sounds, and processing them into coherent "thoughts" that power future predictions. Meanwhile, open-source frameworks such as CNTK and TensorFlow could make it easier for anyone -- not just multi-billion dollar tech companies -- to create innovative artificial intelligence apps.