Please ensure Javascript is enabled for purposes of website accessibility
Log In Help Join The Motley Fool
Free Article Join Over 1 Million Premium Members And Get More In-Depth Stock Guidance and Research
By John Maxfield - Feb 6, 2016 at 7:27AM

As shares of Goldman Sachs (GS -0.65%) have gotten hammered during the past three months, losing nearly 25% of their value since the middle of November, it's finally gotten to the point where I think they're too cheap to ignore. It's this reason, backed by Goldman's aggressive track record of buying back stock, that convinced me to pull the trigger on the investment bank's stock.

It's impossible to ignore that Goldman Sachs' shares trade for a roughly 15% discount to its tangible book value. This typically happens when a bank doesn't return 10% or more on its common equity -- meaning that its annualized net income divided by its common shareholders equity is less than 10%. 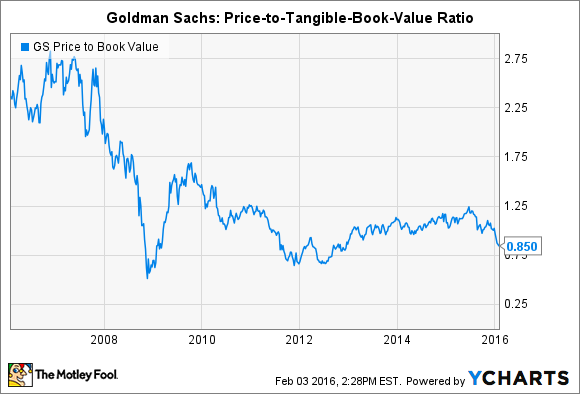 This is true in Goldman Sachs' case. In 2015, it returned only 7.4% on its average common shareholders' equity. What's important to realize, however, is that Goldman's earnings took a $2.99 billion after-tax hit last year due to a settlement with the federal government over conduct stemming back to the financial crisis. There's no doubt that that translates into an actual loss. But there's also little doubt that it's outside of Goldman's standard operating procedures.

If you back this out, in turn, Goldman's return on average common shareholders' equity comes out to 11%. That's a much more respectable return, and it's one that would ordinarily translate into a price-to-tangible-book value ratio above 1.0. Based on valuation alone, then, it seems to me that Goldman's shares are selling for a discount.

The impact of this on shareholders is twofold. First, it reduces Goldman's outstanding share count. As the shares are purchased, they're effectively retired. This consolidates ownership around remaining shareholders. And second, though it's a corollary of the first, it boosts the tangible book value of each remaining share. This is because the company's tangible shareholders' equity is now dispersed over fewer shares. 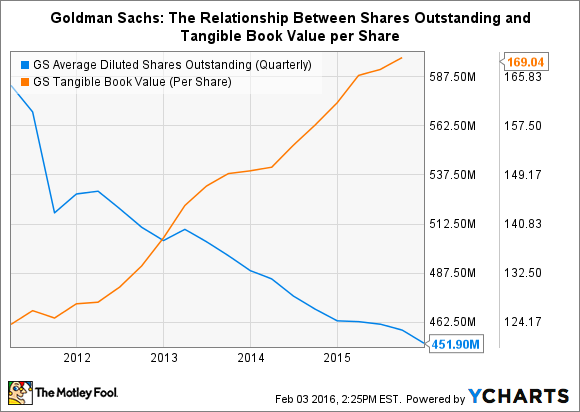 To be clear, share buybacks aren't universally good. In the lead-up to the financial crisis, Bank of America and Citigroup spent roughly $40 billion each on buybacks that could have otherwise been used to absorb losses from the subprime mortgage market. This caused the banks to later raise capital by issuing new stock at much-lower valuations then they had bought it back. This translated into the massive dilution that, even today, means that their shares are worth 75% and 90% less, respectively, than they were before the crisis.

I think it's reasonable to assume in Goldman's case, however, that its executives will be shrewder about capital allocation. Not only did the investment bank prove its metal in the financial crisis, so to speak, but it's also run by some of the savviest operators on Wall Street. They understand how to create value. And given that many of them own large numbers of Goldman's shares themselves, they have a direct incentive to make sure they do so when investing billions in buybacks.

In short, when you combine the fact that Goldman's shares are currently trading for a meaningful discount to tangible book value with the investment bank's historically aggressive approach to share buybacks, it seems to present a compelling opportunity for investors.