Please ensure Javascript is enabled for purposes of website accessibility
Log In Help Join The Motley Fool
Free Article Join Over 1 Million Premium Members And Get More In-Depth Stock Guidance and Research
By Travis Hoium - Feb 6, 2016 at 11:15AM

Demand response could be a disruptive force in wholesale power.

You can be forgiven if you've never heard of FERC Order 745, a utility regulation that says reducing demand can be compensated in the same way adding supply can. But utility executives know exactly what the regulation is, and some have been fighting its existence all the way to the Supreme Court.

That fight ended on Monday, when the court said the Federal Energy Regulatory Commission (FERC) could develop rules and programs that put a price on reducing demand, known as demand response. In wholesale electricity markets, where this rule will take hold, demand response companies can bid on reduction in demand in the same way generators would bid to supply electricity to the market. And that's bad news for wholesale power generators.

The threat to wholesale electricity
You can think of demand response as a way of killing the most profitable hours a power generator has all year. In 2014, on the PJM market, rates were as high as $0.50 per kWh, much higher than the average of 6.4 cents per kWh for the year. It's at these moments that demand response companies such as EnerNOC can work with their partners to reduce demand, generating revenue for curtailing demand.

This is the cheapest way for the grid to operate, but it can take away a high profit revenue source for utilities. And some utilities have been hammered by this lost margin.

Utilities under pressure
Over the past five years, earnings for major wholesale power producers NRG Energy (NRG 1.39%), FirstEnergy (FE 0.93%), and Dominion (D 2.20%) have all dropped significantly, and demand response is a large reason why. This one chart doesn't tell the whole story for these utilities, given their diverse businesses, but it does tell a big part. 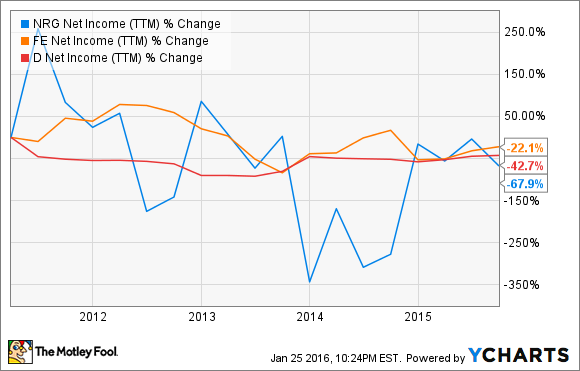 The regulated portion of a utility will generate consistent returns given their regulated monopoly status, but the non-regulated component of the business has much more volatile returns. When wholesale rates are high, they can make strong margins, and if wholesale rates drop, those profits dry up. We're seeing much more of those low rates lately, and demand response will only make that dynamic worse.

The utility model is changing
Utilities across the country have been maneuvering to adapt to changing wholesale rates, new regulations, and other changes going on in the utility space. But not everyone sees the industry playing out the same way.

NRG Energy has invested billions in renewable energy projects in the past five years but decided the returns weren't what investors were looking for and will now spin off that business and focus its core business on regulated and non-regulated electricity generation and distribution.

Dominion is taking another approach, becoming a go-to partner for renewable energy developers. It's using its profits from the regulated side of the business to buy stakes in renewable energy projects, including the tax benefits that come with wind and solar.

Another challenge for utilities
The utility model is in a more turbulent state than at any time in the past century, and demand response is just another disruptive force. It won't affect regulated arms of utilities, but their unregulated arms will see even more margin pressure than they've seen in the past few years. That doesn't bode well for wholesale power plants long-term.