Please ensure Javascript is enabled for purposes of website accessibility
Log In Help Join The Motley Fool
Free Article Join Over 1 Million Premium Members And Get More In-Depth Stock Guidance and Research
By Jeremy Bowman - Feb 6, 2016 at 11:11AM

The athletic apparel retailer may be building momentum for a strong 2016.

What: Shares of Lululemon Athletica (LULU -3.39%) kicked off 2016 on the right foot as the stock got a jump from improved guidance for the key holiday quarter. After a lackluster 2015, the stock gained steadily through the first month of the year: 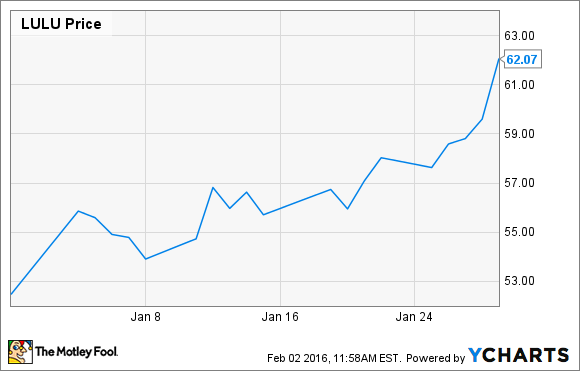 The yoga apparel retailer has struggled to find its footing after a massive pant recall, the surprise resignation of its former CEO Christine Day, and controversial comments from its Founder Chip Wilson.

Shares jumped 4% following the revised guidance, and soared toward the end of the month as the stock got a boost from Wall Street analysts. Susquehanna raised its price target on the retailer, while Guggenheim called the stock "its best idea for 2016." The research group said the company has innovated and updated its product line, and its ability to continue selling its product at full price.

Now what: Lululemon stock also seems to be benefiting from a tailwind in the apparel sector. Rival Under Armour jumped more than 20% of reporting a strong fourth quarter, and the stock was up as much as 4% on the day following a strong earnings report from Michael Kors.

Wall Street sentiment is certainly shifting in Lululemon's favor, but its profit growth remains tepid.  Even with the elevated guidance, analysts see fourth-quarter EPS increasing from just $0.78 last year to $0.80, indicating the company may still be dealing with excess inventory and other problems weighing on the bottom line. Analysts are expecting a soild increase in profits this year, but the company seems unlikely to return to its year of booming post-recession growth.