Please ensure Javascript is enabled for purposes of website accessibility
Log In Help Join The Motley Fool
Free Article Join Over 1 Million Premium Members And Get More In-Depth Stock Guidance and Research
By Jeremy Bowman - Feb 6, 2016 at 8:28AM

The better-burger chain's struggles continued, but the company should see more growth in the second half of the year.

What: Shares of The Habit Restaurants (HABT) continued to slide last month as the company reported a middling preliminary earnings report and the backlash against highly valued fast-casual restaurant stocks continued. 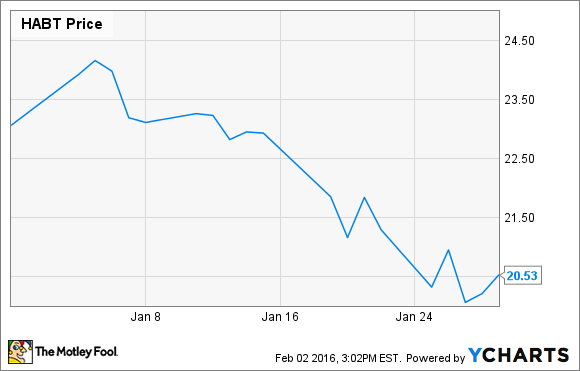 So what: Habit's big news over the month was its fourth-quarter preliminary earnings report, which came out on January 11. The company reported total revenue of $60.6 million, or a 25% increase from the year before, on comparable sales growth of 3.3% and earnings per share of $0.04.

The report marked the company's 48th consecutive quarter of comparable sales growth, an impressive streak, but customer traffic actually fell by 0.2% in the quarter -- the same-store sales gains came entirely from an increase in the average transaction price. Investors generally prefer to see comparable sales increases coming from higher traffic as that indicates the stores are getting more popular, which is more sustainable than getting the same customers to pay more. Comparisons were also tough in the quarter, as Habit had posted a 13.2% increase in the year-ago quarter.

The stock was flat the day after the release, but fell during the second half of the month as high-priced stocks like Habit seem to have been most affected by the sell-off. The market seems to be losing patience for stocks with triple-digit P/E ratios putting up quarterly earnings of just $0.04 a share.

Now what: After starting strong out of the gate following its 2014 IPO, Habit shares have steadily retreated and now trade at all-time lows. A number of fast-casual stocks have had a similar experience as the market euphoria for the next Chipotle has led to a number of high-priced and now disappointing IPOs in the sector.

It's too soon to write off Habit, however. Considering its valuation, investors have a right to expect comparable sales growth stronger than 3%, but Habit is opening new stores at an impressive clip. The company plans to grow its store base by more than 20% next year, adding 30 to 32 locations, which could help it overcome analysts' modest expectations. Same-store sales growth should improve in the second half of the year once the company laps the strong quarters that followed Consumer Reports naming it the nation's #1 burger. If comps start improving, the stock should begin to rebound.

Jeremy Bowman owns shares of Chipotle Mexican Grill and Habit Restaurants. The Motley Fool owns shares of and recommends Chipotle Mexican Grill. Try any of our Foolish newsletter services free for 30 days. We Fools may not all hold the same opinions, but we all believe that considering a diverse range of insights makes us better investors. The Motley Fool has a disclosure policy.