Please ensure Javascript is enabled for purposes of website accessibility
Log In Help Join The Motley Fool
Free Article Join Over 1 Million Premium Members And Get More In-Depth Stock Guidance and Research
By Jeremy Bowman - Feb 7, 2016 at 9:29AM

The high-end furniture chain continued to slump in the new year, but concerns may be overwrought.

What: Restoration Hardware Holdings Inc (RH 1.41%) continued a slide that began last November. Analysts continued to downgrade the stock, and the general market sell-off hit cyclical and highly valued stocks like Restoration Hardware harder than others. As you can see from the chart below, most of the stock's slide came in the first two weeks of the month, when the market was at its weakest. 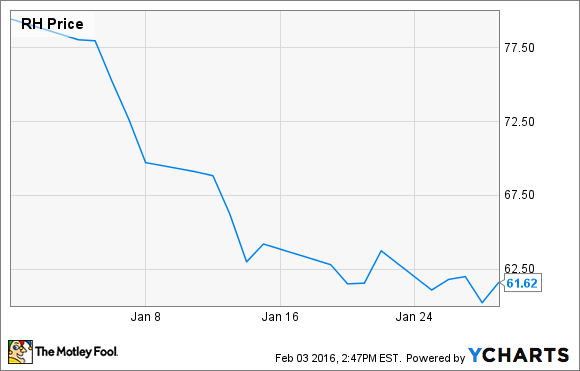 So what: Like other high-priced stocks, Restoration seemed to take a harder fall than the rest of the market -- it is now down nearly 50% from its all-time high a few months ago. As a high-end retail stock, the company is especially sensitive to concerns about a slowing economy and a recession, rumors of which have been circulating through the news. The stock market sell-off may also make some customers wary about spending on high-end furniture for their home.

Peers like Ethan Allen and Williams-Sonoma were also hit by the sell-off, showing that the decline wasn't specific to Restoration Hardware. The company was downgraded by The Street on January 8, and on February 1 Cowen & Co. lowered its rating, expressing concerns about slower spending by high-end consumers. Cowen also noted pressures from currency and a slowdown in sales in oil-rich states.

Now what: A stock that was once a market darling has been quickly undone by economic worries. Oddly, Restoration Hardware's performance has not shown any signs of weakness. The company has edged past analyst estimates in its last four quarters, and the consensus is for more than 20% growth in EPS this year. The currency issues Cowen referenced concerned Brazilian customers shopping in Miami, but Restoration's business is entirely based in North America, which should be an advantage with the strong dollar. It also purchases some materials from Europe, yielding a further benefit. With little evidence of slowing sales and a forward P/E now below 15, Restoration could be one strong earnings report away from roaring back.

Jeremy Bowman has no position in any stocks mentioned. The Motley Fool recommends Restoration Hardware and Williams-Sonoma. Try any of our Foolish newsletter services free for 30 days. We Fools may not all hold the same opinions, but we all believe that considering a diverse range of insights makes us better investors. The Motley Fool has a disclosure policy.