A recent rumor claims Apple plans to finally introduce this widely available technology with the iPhone 7, but the tech giant probably has more exciting plans in the works.

With concerns over the strength of iPhone sales and last week's uninspiring earnings report, shares of Apple (AAPL -0.14%).have sagged. Adding insult to injury, rival Alphabet's blowout earnings release briefly grew its market capitalization enough for the search giant to steal Apple's long-held title as the world's most valuable company. 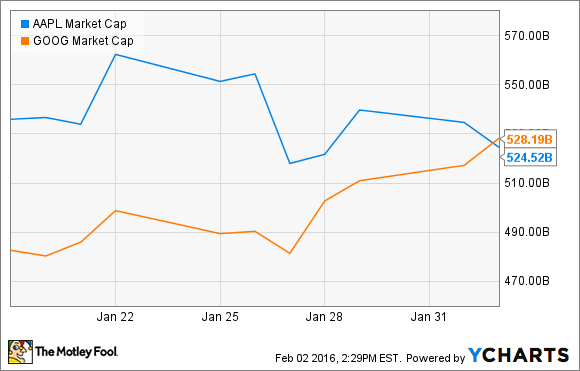 Things should get better heading into the second half of the year with the impending release of Apple's iPhone 7. And though a recent rumor regarding the iPhone 7's purported "flagship" feature created some concerns, this is one rumor Apple investors would do well to ignore.

The iPhone 7's flagship feature?
Last week, Bloomberg published a report claiming Apple has been quietly developing its own wireless charging technology that could make its way into the iPhone 7. From there, a number of other media outlets extrapolated the story to claim that wireless charging will feature prominently in Apple's forthcoming handset. However, I'm not so sure about that, for one specific reason.

Historically speaking, Apple has a strong record of opposing NFC or inductive charging pads like those currently found for many of rival Samsung's recent flagship smartphones -- the Note 5, S6, and S6 Edge. Specifically, as Apple's veteran VP of marketing, Phil Schiller, noted in the wake of the iPhone 5 release, current wireless charging pads merely shift the need to plug the charging cord from the device itself to the wireless charging pad. So the core technology doesn't alleviate the pain point of charging, which usually involves being within arm's reach of an outlet.

True, numerous reports say that Apple plans to eliminate the headphone jack in the forthcoming iPhone 7 to further push the boundaries of smartphone thinness. However, it makes sense that Apple will either develop headphones that work with Apple's Lightning power connector or operate via Bluetooth. This doesn't strike me as a sign that Apple is intent on combining wireless charging in this year's iPhone form factor revamp.

Worth the wait
Rather, in keeping with Apple's preference to develop exciting new hardware specs, expect Apple to pursue wireless charging integration only when it can produce the kind of wow factor Apple loves to engender from its users. According to reports, Apple has such a technology in the works, but it probably sits more than a single product cycle into the future.

In an effort to untether the iPhone from power outlets, Apple is reportedly working toward a technology that would allow the iPhone to charge itself through another Apple device, like an updated iMac that includes the necessary components to power such a feature. Though it's just a rumor at this early stage, and it's worth noting that many of Apple's patents never appear in its devices, this strikes me as the kind of breakthrough technology that solves a problem by creating an entirely new method for achieving the desired result.

This also strikes me as the kind of major hardware innovation that Apple might prefer to introduce with its odd-year iPhone 7s. It appears Apple prefers to position major features in its s-series iPhones -- things such as Force Touch, Touch ID, and Siri. This makes strategic sense, as it helps differentiate the new s-series iPhone from the preceding iPhone that shares the same form factor.

Rest assured that as we head toward its likely September launch, Apple iPhone 7 rumors will approach a fever pitch. However, in terms of this specific rumor, my money's on seeing wireless charging surface in a more impressive way no sooner than the iPhone 7s in 2017.

Suzanne Frey, an executive at Alphabet, is a member of The Motley Fool's board of directors. Andrew Tonner owns shares of Apple. The Motley Fool owns shares of and recommends Alphabet (A shares), Alphabet (C shares), and Apple. Try any of our Foolish newsletter services free for 30 days. We Fools may not all hold the same opinions, but we all believe that considering a diverse range of insights makes us better investors. The Motley Fool has a disclosure policy.