What: Shares of Energen Corporation (EGN) dropped 14% in January as oil prices continued to threaten its future.

So what: Energen's stock has been trading in line with oil prices in 2016 and rightfully so. If prices don't recover, there's little chance the company can survive after reporting $354.9 million in losses in the first three quarters of 2015. On top of that, the company has $750 million in long-term debt still hanging on the balance sheet. 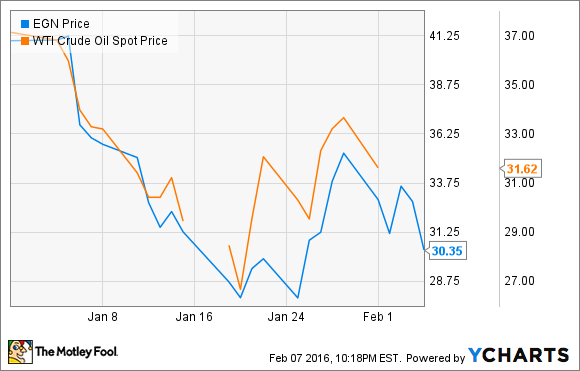 So, despite the fact that the company didn't report any major negative items in January, the stock still took a tumble.

Now what: The fall in U.S. energy companies so far in 2016 has been due to the continued weakness in oil prices and there's no indication that trend will end soon. OPEC has to keep the pressure on oil producers or they'll risk the latter increasing production the moment oil prices go up, and it doesn't appear that demand will take a big step forward with China's economy in turmoil.

That doesn't bode well for small energy producers like Energen. If investors want exposure to oil prices, integrated oil majors are the way to play a potential recovery. They have bigger and better balance sheets that can last through low oil prices if they persist for the next year or two.