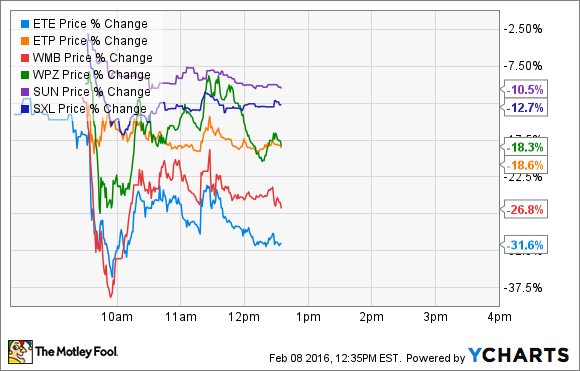 But that's not the only thing moving shares lower today. Oil prices are down again, and the entire energy sector is dealing with another big sell-off day. Factor in word that Chesapeake Energy -- the second-largest natural gas producer in the US and a big customer of Williams Companies -- was working with a law firm known for its restructuring work, and that's just another thing that's rattling energy investors today.

Now what: This could turn out to be a good time to invest in these beaten-down midstream companies when we look back in a year or two, but there remains a lot of uncertainty. The Energy Transfer and Williams entities all carry significant amounts of debt, and the viability of the deal for Energy Transfer to acquire Williams has been in doubt for some time.

Replacing a CFO in the middle of this process is clearly not reassuring the market, and the way the company informed the market has also caused concern. Energy Transfer did not issue a press release which is typical when a key executive like a CFO is replaced, instead only filing with the SEC on Friday.

The company filed a second 8-K today, following the major drop in its stock price after news got out that it was making a change in the executive suite, saying the following:

Frankly, there may not be anything bad going on, but it's certainly not very reassuring, especially in the midst of the Williams acquisition, and only adds more uncertainty at a time when the market is gun shy as it is. Frankly, it's probably best to remain on the sidelines and let the merger play out before investing in any of these entities. There are too many moving parts right now to really evaluate and value the opportunity until things stabilize and we know what the business will look like going forward.