Stocks spent most of the trading session in negative territory but ended the day almost exactly where they started. The Dow Jones Industrial Average (DJINDICES: ^DJI) shed 12 points, or 0.1% and the S&P 500 (SNPINDEX: ^GSPC) lost 1 points, or 0.1%. 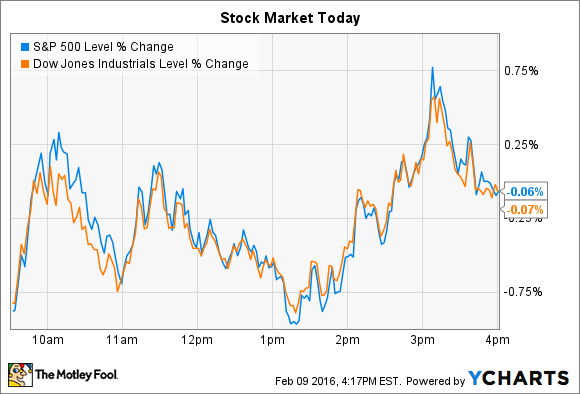 In economic news, the government announced that 3.1 million people quit their jobs in December (for a "quits rate" of 2.1%), setting a nine-year high. Rising quit figures correlate with an improving labor market since they suggest increasing confidence on the part of employees who choose to voluntarily separate from their employers.  .

Meanwhile Coca-Cola (KO -1.11%) and Viacom (NASDAQ: VIA)(VIAB) stocks both made moves today in the wake of posting quarterly earnings figures.

Coke's management was pleased with the results. "Our fourth quarter performance was a testament to the action we took as the Company continued to deliver solid pricing and unit case volume growth," CEO Muhtar Kent said in a press release.

Executives were especially encouraged by sales growth in the U.S. market, which logged its strongest performance in three years thanks to brisk demand for the Coke Zero, Sprite, and Fanta brands making up for continued weakness in Diet Coke sales. The U.S. market managed 4% organic growth this quarter, compared to 3% in the prior quarter.

Looking ahead, the company said it will speed up its refranchising initiative, which should boost cash flow and profitability this year. Beyond that, a challenging global economy will likely keep pressure on sales, but Kent and his team believe they can deliver 5% higher profits this year on continued positive momentum in the U.S. market.

Viacom's media slump
Viacom shares plunged 21% lower after the media giant reported a double-digit drop in fiscal first-quarter earnings as advertising sales and film receipts both slipped. Overall revenue fell 6% and expenses rose by 4%, which pushed operating margin down to 27% of sales from 28% last year.

CEO Philippe Dauman admitted that Viacom's results reflected "significant industry disruption" in the media business. But he saw improvements coming as the year progresses, thanks to rising ratings in its VH1, Spike, and Nickelodeon networks and growing affiliate fee revenue. "Although our industry continues to face headwinds, we expect our positive momentum to continue and build throughout the year," he said .

In reacting to the news a Wall Street analyst with Bernstein put out a research note asking how the slumping sales, income, and margin figures don't all point to a business in decline. "We continue to hold the view that the old business of serving kids/teens with linear TV networks is doomed, and the new business of serving kids/teens with on-demand, digitally delivered entertainment is unlikely to be won by Viacom," the analyst said.

That type of criticism could be just what Dauman was referring to in today's conference call when he said, "our outlook and the facts have been distorted and obscured by the naysayers, self-interested critics and publicity seekers." But Wall Street is apparently moving toward that bearish reading today, as Viacom's daily drop left shares at roughly 50% lower over the past year .

Demitrios Kalogeropoulos has no position in any stocks mentioned. The Motley Fool recommends Coca-Cola. Try any of our Foolish newsletter services free for 30 days. We Fools may not all hold the same opinions, but we all believe that considering a diverse range of insights makes us better investors. The Motley Fool has a disclosure policy.