Please ensure Javascript is enabled for purposes of website accessibility
Log In Help Join The Motley Fool
Free Article Join Over 1 Million Premium Members And Get More In-Depth Stock Guidance and Research
By George Budwell – Feb 9, 2016 at 8:31AM

Celldex was a victim of the market's wrath toward clinical-stage biotechs last month. 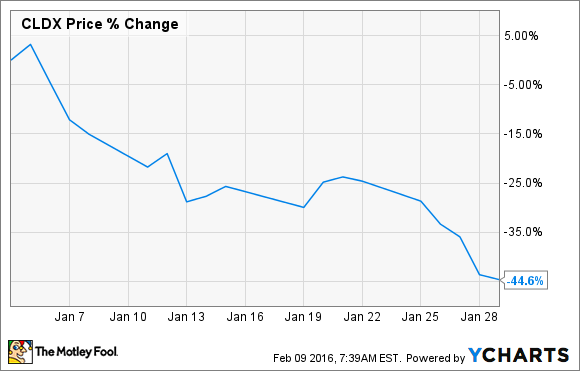 What: Celldex Therapeutics (CLDX -2.78%) was one of the worst-performing biotech stocks last month, losing roughly 45% of its value, according to data provided by S&P Global Market Intelligence. Its plunge appeared to be driven by concerns about a forthcoming interim analysis for its experimental brain cancer vaccine Rintega, which is due out any day now.

So what: This sharp decline ahead of Rintega's clinical update doesn't exactly inspire confidence, as it seems to imply that the results have leaked -- and that they aren't good. Then again, the entire biotech industry is in a tailspin at the moment, so Celldex's downturn may simply reflect the market's dour mood toward risky biotechs in general.

Now what: The good news is that there haven't been any insider sales reported at Celldex -- automatic or otherwise -- in the last two months.  I personally find this inactivity somewhat reassuring, given that insider activity can sometimes be a good predictor of how a particular clinical catalyst will play out in the world of small-cap biotechs.

Another interesting tidbit is that the options market has been relatively quiet heading into Rintega's data release. Over the years, I've found that data leaks tend to show up in the options market first, as spikes in call or put buying.

Overall, I'm of the opinion that this sell-off is being driven by marketwide forces, rather than the pending failure of Rintega. I might be wrong, but the potential vaccine's failure seems more than baked into the share price at this point. After all, Celldex sports a rich clinical pipeline of promising experimental oncology drug candidates that the market seems to be ignoring for the most part right now.

George Budwell has no position in any stocks mentioned. The Motley Fool recommends Celldex Therapeutics. Try any of our Foolish newsletter services free for 30 days. We Fools may not all hold the same opinions, but we all believe that considering a diverse range of insights makes us better investors. The Motley Fool has a disclosure policy.