On Dec. 11, 2015 DuPont (NYSE:DD) and Dow Chemical (NYSE:DOW) proposed an all-stock merger of equals. The combined company will spin-off three independent companies over the subsequent 18 to 24 months after the closing of the merger.

Shares in Dow Chemical are down 24.4% while DuPont is down 26.8% since the announcement of the proposed merger. The market has grown increasingly frustrated with both companies on the back of mediocre results from a slowing economy and a strong dollar. The two companies have been targets of activist investors, and it appears the activists are finally getting their wish with the potential unlocking of value from the announced spin-offs. 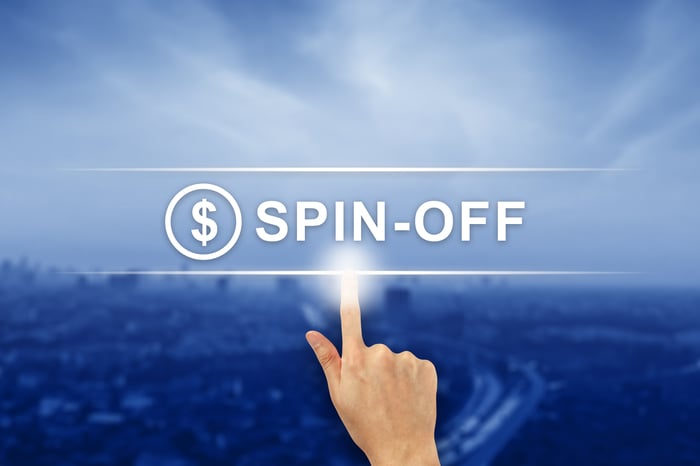 We'll see if an opportunity exists for investors with the merger and subsequent spin-offs.

1+1=3
DuPont Chairman and CEO Edward D. Breen had this to say about the deal:

This is an extraordinary opportunity to deliver long-term, sustainable shareholder value through the combination of two highly complementary global leaders and the creation of three strong, focused, industry-leading businesses. Each of these businesses will be able to allocate capital more effectively, apply its powerful innovation more productively, and extend its value-added products and solutions to more customers worldwide. For DuPont, this is a definitive leap forward on our path to higher growth and higher value. This merger of equals will create significant near-term value through substantial cost synergies and additional upside from growth synergies. Longer term, the three-way split we intend to pursue is expected to unlock even greater value for shareholders and customers and more opportunity for employees as each business will be a leader in attractive segments where global challenges are driving demand for these businesses' distinctive offerings.

The plan, as Breen said, will be to combine the two companies into one and then split the new company into three different businesses that provide better focus and profitability in their respective markets. The three companies will be: 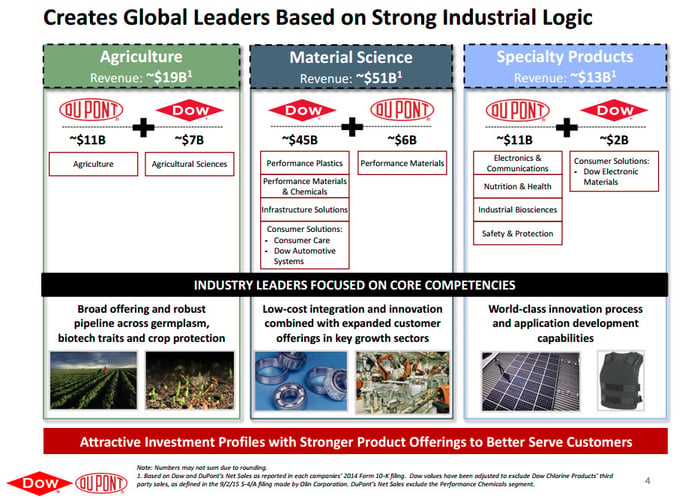 Dow Chairman and CEO Andrew Liveris  will become the executive chairman of the new combined Dow-DuPont company, and Breen will keep his CEO title in the interim. They haven't decided on who will run the three companies yet.

What happens next?
Given that the combined company will control a 41% share of U.S. corn seeds and related genetics, this merger is likely to undergo heavy regulatory scrutiny. An approval is not a sure thing, and in fact the National Farmers Union is already contesting the deal because mergers in the agriculture supply chain create difficulties for rural communities.  "It's time for federal regulators to remember that bigger isn't always better," said union President Roger Johnson.

Regardless, many believe the deal will ultimately gain regulatory approval. Dow and DuPont "used to be the two big rivals in American chemicals, but they've gone down completely divergent paths," said Jonas Oxgaard, an analyst at Sanford C. Bernstein. "For the past 10 years, the companies have not truly been competitors."

In the interim, I would expect to see plenty of cost-cutting, job layoffs, and a decrease in R&D spending from both companies.

Investor takeaway
Spin-offs have proved quite lucrative for investors over the years. A study on spin-offs by John McConnell and Alexei Ovtchinnikov of Purdue University showed that over a 12-, 24-, and 36-month period, investors would have generated excess returns of 19.4%, 24.4%, and 26.3% by investing in the subsidiaries of the parent company.

Can we say the same if this merger and subsequent spin-offs happen? The spin-off should create an opportunity for long-term investors at current levels because it creates three leading companies that will be better streamlined and focused on meeting challenges and delivering returns, but of course, no one knows for sure what will happen.

What we do know is that DuPont and Dow Chemical are both reasonably priced and generate excess free cash. The merger and subsequent spin-offs should unlock shareholder value, as the stand-alone entities are likely to garner much higher multiples from each of their individual growth profiles and the simplicity of their business model.