PG&E Corporation has a risky year ahead -- here’s what you need to know. 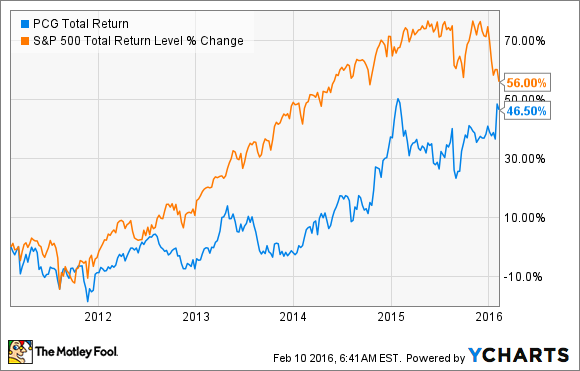 Over the past five years, the S&P 500 has outpaced PG&E Corporation (NYSE: PCG) stock on a total return basis by more than 20%. This lackluster performance has some investors wondering whether PG&E stock is really worth it. This is shaping up to be an interesting year for this utility, and there are plenty of reasons 2016 could be its best year yet. But there are also plenty of things that could go wrong. Here are three reasons PG&E stock could fall.

1. Regulator hater
The California Public Utilities Commission (CPUC) has the future of PG&E's finances in its hands. The company submitted its general rate case (GRC) plan last year that will dictate whether PG&E can raise rates in the year to come.

The ask is rather modest: just $4 per month for an average residential customer, an amount that would still keep rates below the national average and would allow PG&E to make good on its plans to upgrade grids and invest in new electricity generation.

The decision could come as soon as the end of this year, but PG&E is on tense footing with the CPUC. In 2010, a PG&E gas pipeline explosion killed eight people in San Bruno, Calif. Since then, the utility has had to devote significant time and money -- to the tune of an estimated $4.8 billion -- to make things right. But even if PG&E has put its legal battles behind it, regulators have long memories. Any negative impact this has on its GRC request could put it in a tight financial spot for the next few years.

2. Gone Green
PG&E has one of the most environmentally oriented energy portfolios of any utility in the country. It's received significant state-level support to build up a clean-energy mix that's 55% greenhouse gas-free. Of its owned assets, that number jumps up to 80%. 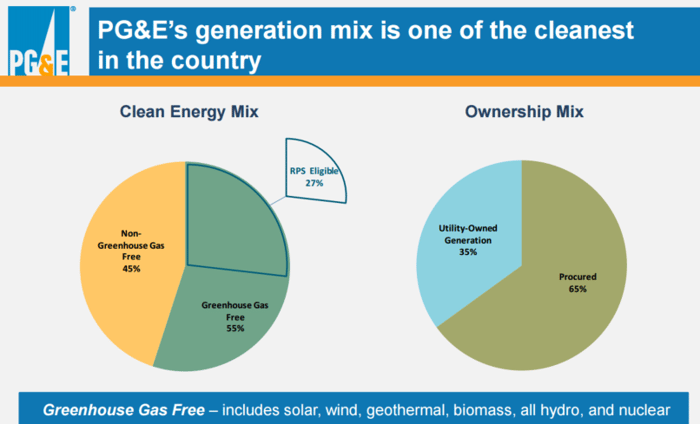 But support for environmentally friendly power is political. While California-level legislature is likely to move ahead with acts such as SB 350, which calls for 50% renewable-energy generation by 2030, it's unclear whether PG&E Corporation will continue to enjoy favors at the federal level.

If the greenification of electricity generation slows, PG&E may be on its own. As federal subsidies wither away, it'll be forced to rethink finances for future projects. And as the biggest investor-owned utility in the greenest state, it'll be on its own exploring new utility-scale green infrastructure. PG&E doesn't necessarily need federal support -- but any indication that PG&E may be pushing too far ahead on its own could scare investors away.

3. Dividend dynamite?
For many investors, an investment in PG&E stock is an investment in its dividend. The utility currently offers a 3.4% yield, a percentage that's dropped in recent years as its stock has risen while its distribution has remained steady. 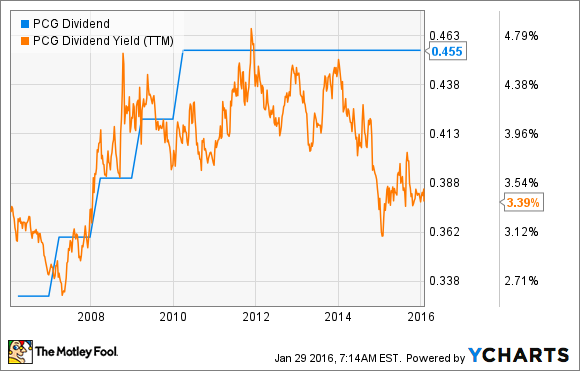 With three years of steady payouts, it's tempting to believe that a dividend increase may be on the horizon. But PG&E isn't exactly rolling around in cash. With as much debt as equity and a current dividend distribution that eats up essentially all of its earnings, PG&E may not be ready to increase its payout. And with a stock price valuation greater than over 85% of its utility peers offering dividends of their own, investors may be especially hesitant to put their money on PG&E.

Sell PG&E in 2016?
In 2016, PG&E Corporation offers investors both risk and return. Its stock is not for the faint-hearted. It's in regulatory limbo, is going green as no utility has gone before, and may not be the best dividend stock for your buck. But if these same issues pan out as PG&E wants them to, these risks could contain significant upside. Investors will have to weigh opportunities, determine how much risk they want to stomach, and make a decision accordingly.

Justin Loiseau has no position in any stocks mentioned, but he does like California. The Motley Fool has no position in any of the stocks mentioned. Try any of our Foolish newsletter services free for 30 days. We Fools may not all hold the same opinions, but we all believe that considering a diverse range of insights makes us better investors. The Motley Fool has a disclosure policy.