Though it has outperformed the broad market by roughly fifteen-fold since 1980, Apple (NASDAQ:AAPL) stock hasn't made life pleasant for investors over the past few months. 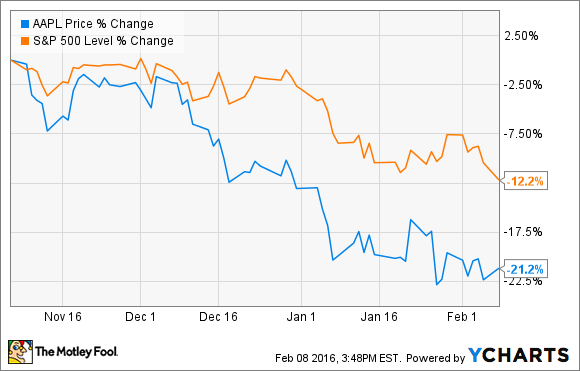 Late last month, the Mac maker posted results that disappointed the market, even as it set a record for the most profitable quarter ever in the process. Apple's guidance also forecast its sales to contract year over year for the first time in 13 years. Investors weren't happy.

However, as the company emphasized on its conference call, its sprawling services empire continues to thrive. And though Apple will live and die by the iPhone until other big-ticket projects reach the market, another development points to Apple's continued dominance in areas like Apple Pay.

In the weeks since Apple's earnings, a number of metrics have come to light that testify to Apple Pay's impressive growth since its 2014 debut. On its conference call, Apple reported that over 5 million points of payment currently support Apple Pay. Furthermore, a recent Bloomberg report claims that Apple Pay availability now exceeds 2 million total retail locations, up substantially from Apple's reported internal goal of 1.5 million retail locations by the end of 2015.

What's more, thanks to its increased exposure, Apple Pay has seen an acceleration in usage. On its recent investor call, Apple said its mobile payments solution saw its growth rate accelerate over tenfold from the first half of 2015 to the second half. And with mobile payments expected to increase from $450 billion last year to $620 billion in 2016, the outlook for Apple's mobile payment product remains favorable. While its impact in isolation might not move the needle for Apple, investors shouldn't underestimate the effect of increasingly key services such as Apple Pay as part of its broader ecosystem.

All about the ecosystem
Though Apple itself has never publicly disclosed Apple Pay's exact financial terms, it's unlikely that the mobile payments platform produces meaningful profits. According to numerous sources, Apple collects a mere 0.15% of each transaction that occurs through its payments platform. That's $0.15 for every $100, which virtually guarantees that the service makes an indistinguishable impact on the company's bottom line. Said another way, if Apple Pay theoretically captured the entirety of the $450 billion in mobile transactions made in 2015, the tech giant would have yielded revenue of $675 million. That might sound like a lot, but it's only 0.3% of Apple's FY 2015 revenue. So we're not talking about a deficiency on Apple Pay's part as much as how its contribution pales in light of how massive Apple is.

Apple is betting that mobile payments will become a core feature for smartphones in the future -- and that's a bet that usage data supports. According to a report by Pymnts, 16% of those who own a compatible device (an iPhone 5s or later) reported as having tried Apple Pay, up from 9% in late 2014. Though each major mobile platform has its own mobile payments offering, these kinds of habit-forming products help contribute to the "stickiness" of Apple's platform, which directly affects Apple's ability to repeatedly sell its high-priced hardware to consumers.

So while Apple Pay in isolation won't move Apple's massive financial needle, it's also important to remember that the service carries more value than investors might initially think.