Aubrey McClendon is at it again. The founder and former CEO of Chesapeake Energy (OTC:CHKA.Q) recently partnered his new private company, American Energy Partners LP, with Argentina's state-run YPF SA (NYSE:YPF) to explore and develop unconventional oil and gas in the South American nation. The partnership between the two companies includes drilling more than 20 wells, as well as gas treatment facilities.

Chesapeake shareholders ousted McClendon from the company he began after he improperly used funds and leveraged Chesapeake's balance sheet to secure some of the best shale plays in the United States. Now he's starting over in Argentina, which could have more than 800 trillion cubic feet of shale gas. That would be more than the U.S. and second in the world behind only China.

Let's look at the potential for Argentina and the possible ramifications for the oil and gas market.

What's up with Argentina?
The Vaca Muerta -- Spanish for "dead cow" -- has turned Argentina into one of the world's largest shale producers, behind only North America. The formation, located in the Patagonian province of Neuquen of Argentina, has already attracted several partners, including the deal with American Energy Partners that makes it the fourth-largest partner behind Chevron (NYSE:CVX), Dow Chemical (NYSE:DOW), and Petroliam. 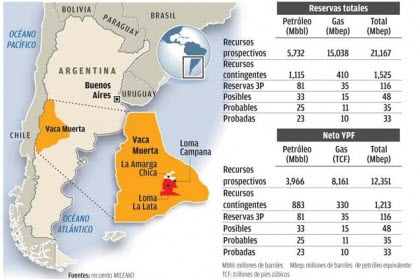 The agreement calls for American Energy to fund the majority of the $500 million that the two companies expect to invest in the region. McClendon has three months to secure most of the $500 million. He's never had an issue with banks and private equity firms in securing funding, so I anticipate he won't have a problem this time around, either. His track record speaks for itself in how he's able to find and develop unconventional shale.

What this means for oil and gas in Argentina
The Vaca Muerta shale formation looks promising for the country, and partnering with McClendon will bring experience and an accelerated learning curve. As YPF CEO Miguel Galuccio said, "This will introduce a kind of healthy competition that all players will benefit from, as early wildcatters and smaller companies did early on in the development of the U.S. shale industry."

The region has already attracted massive oil and gas businesses, including ExxonMobil (NYSE:XOM) and Chevron (NYSE:CVX), and I wouldn't be surprised to see McClendon's presence leading to additional foreign investment in the shale region. McClendon was one of the first in the U.S. to use and implement the new drilling and fracking technologies that started the shale revolution. The biggest energy producers utterly ignored it until Exxon's purchase of XTO Energy in late 2009.

McClendon also has the ability and expertise to pinpoint and develop unconventional shale oil and gas. It should be no different this time around, and it should continue to attract players of all sizes.

Investor takeaway
Argentina sets the price of its oil and gas to encourage exploration and production of shale assets in the region. It's also part of a strategy to help Argentina become an exporter of oil and gas. With the new government regulating oil prices at $67.50 per barrel for Medanito crude quality oil, companies have incentive to pump out as much oil and gas as possible. They'll do anything in their power to gain exposure to production opportunities in Argentina at these prices.

The added supply of oil and gas isn't likely to get a warm welcome, though. The glut of supply already in the market has pressured prices dramatically. So this development will be great for Argentina and the companies that produce there, but when Argentina begins exporting its energy resources, it could put even more downward pressure on already weak oil and gas prices.