Please ensure Javascript is enabled for purposes of website accessibility
Log In Help Join The Motley Fool
Free Article Join Over 1 Million Premium Members And Get More In-Depth Stock Guidance and Research
By George Budwell - Feb 11, 2016 at 11:27AM 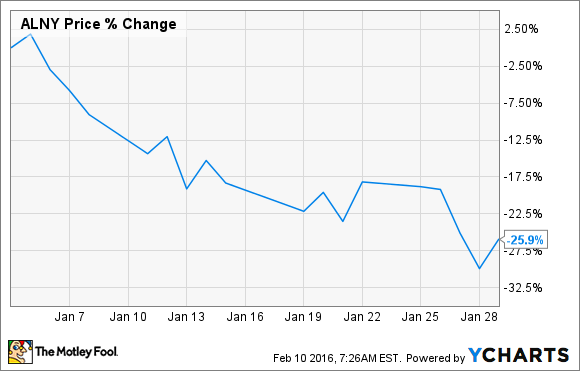 What: According to data provided by S&P Global Market Intelligence, shares of the rare disease drugmaker Alnylam Pharmaceuticals (ALNY 2.27%) lost over a quarter of their value last month. The good news is that Alnylam's hefty monthly slide was apparently driven by the broader sell-off across the entire biotech landscape -- not a negative clinical or regulatory update.

So what: Alnylam's shares have been garnering a substantial premium based mainly on the prospects of its late-stage drug patisiran, indicated as a potential treatment for the fatal neurodegenerative disease Familial Amyloidotic Polyneuropathy, or FAP. Using Pfizer's EU-approved medicine Vyndaqel as a starting point, analysts think that patisiran could generate around $800 million in peak sales.

The problem is that patisiran probably won't see a regulatory filing until at least 2017, putting its commercial launch on track for perhaps 2018. Complicating matters further, Ionis Pharmaceuticals also has a late-stage candidate, IONIS-TTRRx, in development for FAP that's neck and neck with patisiran in terms of its clinical progress.

Now what: Per the company's update at last month's J.P. Morgan Healthcare conference, the drugmaker should release over 10 clinical updates for its broad pipeline this year. Unfortunately, there won't be a single late-stage data readout among them. So, given the market's overtly negative view of risky developmental-stage biotechs of late and the company's lack of major clinical catalysts in the near-term, Alnylam may struggle to reverse this downward trend until a sea-shift in sentiment takes place. That's why investors may want to hold off on picking up shares in this promising RNAi drug specialist for the time being.