Learn why the best solar yieldco is firing on all cylinders, as well as why its growth prospects may become threatened if the worst oil crash in 50 years continues.

For income investors seeking a safer way to profit from the coming solar energy revolution, I can think of no better way than with solar yieldco 8Point3 Energy Partners (NASDAQ: CAFD).

With full 2015 results now in, let's look at why this solar utility has  amazing growth potential over the coming years and why management's impressive long-term growth forecast of 12%-15% per year might become threatened by the current crash in energy prices.

Note that 8Point3 Energy Partners was operating in 2014 but not yet a public yieldco, thus making annual payout comparisons impossible. In addition, the results for Q4 2015 don't include December, which explains the low coverage ratio.

It IPOed with 432 MW of utility-scale solar projects; however, 131 MW of those projects weren't yet complete and were brought online in Q4. Management expects this solar portfolio to generate approximately $70 million in CAFD per year (with an average remaining contract term of 22 years), or $0.99 per share. This provides a forward 2016 coverage ratio of 1.14 at the current quarterly distribution.

Further good news for investors came in the form of the recently announced $35 million Kern School district drop down, a 20 MW project that will be completed by the end of 2016 and is expected to generate an additional $2.7 million in annual CAFD.

At the end of 2015, 8Point3 Energy Partners had $233 million in available liquidity to fund further drop downs to support management's targeted 12%-15% annual distribution growth for 2016. Assuming the same cost per MW as the Kern acquisition this is enough to purchase an additional 133 MW of solar projects, a potential 29% increase in capacity.

Management is delivering a strong payout profile
The recent commodities crash has shown that yield is not the first thing that dividend investors should focus on. Rather payout sustainability and long-term, realistic growth prospects are just as, if not more, important components of a distribution profile.

Assuming management wishes to continue its 3.5% quarterly distribution increases (as it has over the first two quarters and is guiding for) then 8Point3 will wind up paying out $0.944 per share this year, compared with $0.986 per share in projected CAFD. This results in a sustainable and realistic and sustainable 1.04 coverage ratio, just based on its existing portfolio of solar assets.

However, for the yieldco to achieve its long-term growth target management is assuming it will be able to acquire all 1.1 GW of First Solar and SunPower's existing drop down pipeline.

This is where 8Point3 Energy Partners' biggest risk lies, because, should energy prices continue lower or stay low for several years, the yieldco may find this difficult to accomplish. 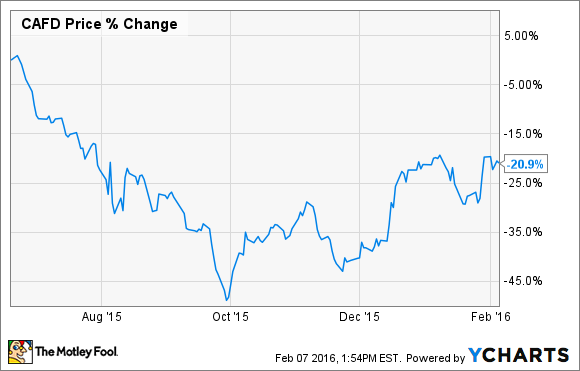 Yieldcos such as 8Point3 Energy Partners, because they payout almost all CAFD to investors, require strong access to both cheap debt and equity markets to fund growth.

While the recent extension of the Solar Income Tax Credit greatly helped 8Point3's share price, it is still trading substantially below its IPO price of $21. That is potentially bad news for long-term income investors because should shares fall much lower, management may not be able to profitably sell new shares to finance further asset acquisitions.

This is important, because as of the end of Q4 2015, 8Point3 Energy Partners had $297.2 million in debt and $200 million of its $233 million in liquidity is from its revolving credit facility. This facility includes debt covenants. Exceeding this ratio would force 8Point3 to suspend distributions, so the yieldco is limited in how much it can borrow.

Thus, investors can probably expect substantial equity issuances in 2016 as 8Point3 proceeds with its growth plans, assuming the share price is high enough to make such deals profitable.

Bottom line
8Point3 Energy Partners' business model is one of the safer ways for dividend lovers to potentially cash in on solar energy growth. However, investors need to realize that, though its actual cash flows aren't directly affected by gas and oil prices, until energy prices recover the yieldco may be forced to rely mostly on more creative ways to fund drop down acquisitions from First Solar and SunPower.

That, in turn, could prolong how long it takes for 8Point3 to acquire new assets. And that may force management to pare back its distribution growth guidance in the future, potentially causing Wall Street to punish the share price even more.

Adam Galas owns shares of 8Point3 Energy Partners. The Motley Fool has no position in any of the stocks mentioned. Try any of our Foolish newsletter services free for 30 days. We Fools may not all hold the same opinions, but we all believe that considering a diverse range of insights makes us better investors. The Motley Fool has a disclosure policy.