While it's no surprise First Solar and SunPower found a buyer for their yieldco, investors could be stunned that the deal price is below where the market valued it.

Shares of 8Point3 Energy Partners LP (CAFD) were down 12.3% early Tuesday afternoon following an announcement after market close Monday that the partnership's sponsors, SunPower Corp. (SPWR -0.12%) and First Solar Inc. (FSLR 0.44%) had finally found a buyer for the yieldco. According to the press release, privately held Capital Dynamics agreed to pay $12.35 per share in cash for 8Point3 Energy Partners, plus additional cash "based on a set daily rate representing cash expected to be generated between December 1, 2017 and closing," less any dividends paid between Jan. 13, 2018, and closing. 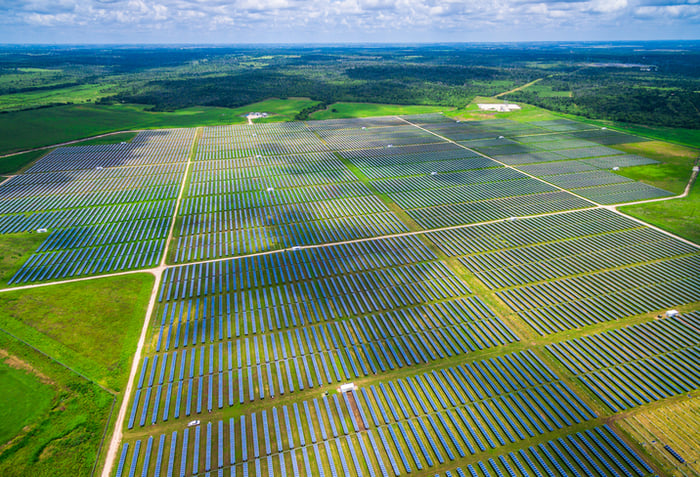 The agreed-upon offer substantially undercut where 8Point3 shares have been trading, with the current $12.16 per share as of 12:20 p.m. EST representing a $1.68 drop from the closing price before the deal was announced. And while this was a surprising outcome, the companies said they'd had discussions with over 130 different potential buyers, and went so far as to sign non-disclosure agreements with 30 of them, likely meaning multiple high-level negotiations. Furthermore, 8Point3 management said that essentially all interested buyers viewed this as an asset acquisition. Thus, the deal was priced based on estimates of the cash flow those assets will generate over their lifetime, not the market value of 8Point3 as a publicly traded entity.

In other words, it sounds like First Solar and SunPower engaged in a  substantial effort to find the best deal they could. Not that that makes this deal any more palatable for shareholders who now find themselves losing money.

Between them, SunPower and First Solar own 64.5% of 8Point3's outstanding shares, meaning they will share in $630.2 million in proceeds plus dividends when the deal closes. It's worth noting that the deal will require majority approval by the shares held by independent parties, however, so a vote is still necessary to move this deal forward.

Plenty of investors have already decided to cash out, move on, and redeploy their capital. That's a reasonable approach, but there's also a good argument to be made to hold on for now. To start, this deal is likely to take another quarter or two to close, and 8Point3 will continue paying a $0.2802 per share quarterly dividend in the meantime. With a solid income stream still intact for the short-term, as well as a bid that's a slight premium to the current share price, it could make sense to hold through closing.

Add it all up, and holding for now would net investors between $0.46 and $0.74 per share in additional proceeds, or even a little more depending on the payout terms. That's a 4% premium if the deal closes in the second quarter and one more dividend is paid, and a 6% premium if it closes in the third quarter after two more dividends are paid. Given the recent volatility in the stock market, having part of your portfolio locked into these predictable gains could be a sensible strategy.

As for SunPower and First Solar, this marks the final stage of what turned out to be a relatively unsuccessful experiment to develop an external yieldco to monetize their large projects. It turned out poorly for a lot of investors (myself included), but it does offer some indication that the market for large solar projects is healthy and competitive enough on its own. And that's a positive thing in the bigger picture.