Volkswagen (VWAGY 4.26%) said on Friday that its worldwide sales rose 3.7% in January.

What Volkswagen said: VW said that its stable of automotive brands, which include the luxury Audi and Porsche brands, delivered 847,800 vehicles in January. That's a 3.7% increase over year-ago results.

It was largely driven by good results in China: VW-brand deliveries were up 15.4% in the world's largest new-car market, while Audi sales rose 6.2% to 54,402 vehicles. Overall sales for the group in China rose 13.9% to 400,100 vehicles in January. That wasn't enough to catch archrival General Motors (GM 1.77%), which sold 421,023 vehicles in China in January, but it was a good result for the troubled Volkswagen group.

The high-volume VW brand struggled elsewhere, as the company continued to deal with the fallout from its diesel-emissions scandal. VW-brand sales were down 3.1% in Europe and 14.6% in the U.S. in January, while challenging economic conditions in key markets in South America led to a 35.8% decline in VW-brand sales in that region.

Audi fared somewhat better, posting a 6.5% sales increase in Europe, a 2.7% gain in the U.S., and a 4% gain in the very troubled Brazilian market.

Here's how sales for VW's major brands stacked up on a global basis: 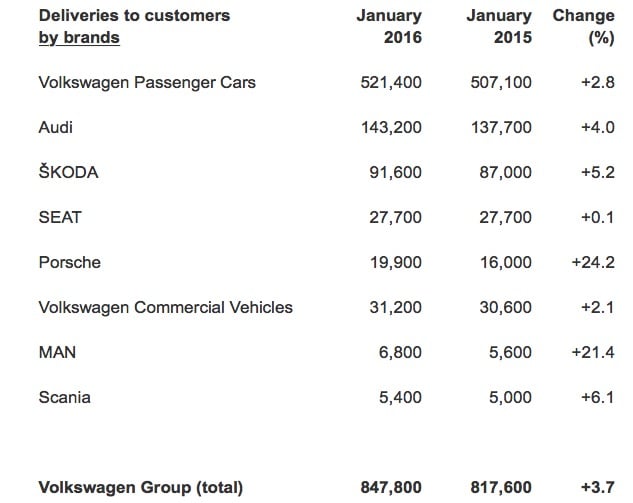 What this means for Volkswagen: It means that, while the diesel scandal has hurt sales of the VW brand in Europe and the U.S., the company as a whole is continuing to find growth despite slowing global markets. The VW brand's image appears not to have been heavily tarnished in China, while the important and highly profitable Audi and Porsche brands appear not to have been damaged (yet) by the scandal.

Last month, VW started the process of recalling about 8.5 million diesel-powered vehicles in Europe to bring them into compliance with European Union emissions regulations. It has yet to come to agreement with U.S. regulators on a solution to the roughly 600,000 affected vehicles here.

What's next for Volkswagen: VW has postponed the release of its fourth-quarter and full-year 2015 financial results indefinitely, likely because it's still working to get a reasonable estimate of the costs of its decision to install software allowing millions of diesel-powered vehicles to produce false-compliant results on emissions tests.

Right now, shareholders and interested investors are waiting for VW to come to terms with U.S. regulators on a deal that would repair the offending vehicles and compensate their owners. Some of the potential paths for such a deal (a buyback of affected vehicles, for instance) could cost several billion dollars and impact VW's bottom line for at least a few years.

For current VW shareholders, the resilience of the group's overall sales has to be heartening. But for those considering an investment in VW's beaten-up shares, it's probably still best to wait until the costs of the scandal are a little clearer.