It was another rough week for the the markets and the healthcare sector in general, but this one healthcare ETF managed to post a gain.

It was another volatile week for the stock market, as the S&P 500 once again ended in the red. Investors continued to flee from the healthcare sector, too, as almost every single ETF that focuses on the space ended the week with a negative return. However, one healthcare ETF -- the First Trust NYSE ARCA Biotech Index (FBT 0.13%) -- managed to sidestep the decline, as it ended the trading week higher than it started, putting it ahead of the market's return for the week. 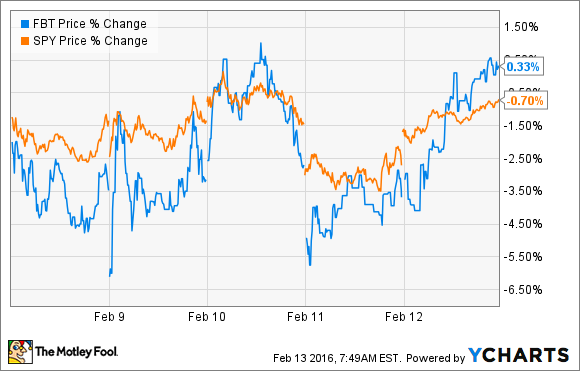 So what's going on inside the First Trust NYSE Arca Biotech Index ETF that allowed it to outperform on an otherwise bad week for the markets?

Cracking it open
As its names suggests, the First Trust NYSE Arca Biotech Index ETF invests its assets in broad range of companies that operate in the biotechnology sector. This fund holds positions in 30 different biotechnology companies of all different sizes, though its overall exposure is tilted toward the mid-caps in the space.

One characteristic that sets this fund apart from other healthcare ETFs is that it follows an equal-weighted strategy, meaning it invests the same amount of capital in all 30 of its holdings initially and then rebalances quarterly. This strategy helps protects the fund from becoming overly concentrated in just a few holdings.

Here's a list of the fund's current top 10 positions:

What went right this week
Several of this ETF's top holdings produced strong returns during the week, but two stocks in particular -- Intercept Pharmaceuticals (ICPT 5.15%) and Quintiles Transnational Holdings (IQV 0.90%) -- had stellar performances that pulled the entire ETF into the green. 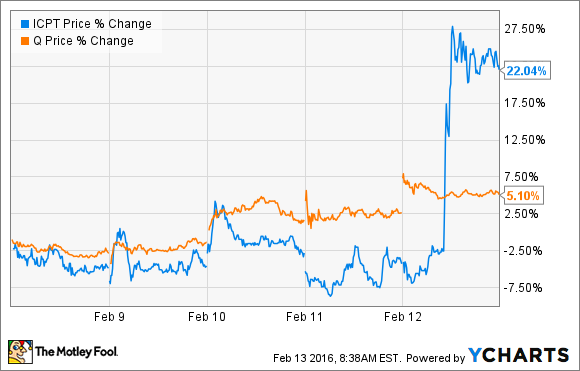 Quintiles Transnational Holding's stock got a boost after the company reported its fourth-quarter earnings. Adjusted earnings per share rang in at $0.90 for the period, which beat analysts' expectations by $0.03 and was up 26.8% over the same time last year. Total revenue increased by a more modest 7.8%, but Quintiles booked $1.49 billion in net business during the quarter, giving it a strong book-to-bill ratio of 1.32 for the period. Quintiles also predicted that the good times will continue into 2016, as it is guiding for constant currency revenue growth of more than 7% and earnings-per-share growth of at least 11%.

Intercept Pharmaceuticals' shares got a major boost on Friday, after a report broke that the company might be looking to sell itself. Intercept Pharmaceuticals declined to comment on the report, so it's unknown right now if a buyout will be taking place, but either way, traders rushed in to buy shares ahead of any potential announcement.

This isn't the first time rumors have circulated about Intercept as a buyout target, so I have a hard time believing this rumor will be true. After all, the FDA is currently reviewing its lead compound, obeticholic acid, as a potential treatment for primary biliary cholangitis, and with a PDUFA date of May 29 right around the corner, it would make more sense for a potential acquirer to wait a few weeks before making an offer. A buyer won't even have to wait that long, as the FDA will be holding an advisory committee meeting on April 7 to discuss the drug, so investors will have a much better idea of the drug's chances at that time. Anyone looking to make an offer before then had better be exceedingly confident that the compound will win regulatory approval.

Can the FBT continue to win?
There is a lot to like about the FBT, as its equal-weighted strategy has been proved over time to be a winning formula. It also sports a modest expense ratio of only 0.58%, so any investor looking for a cheap and easy way to gain exposure to the biotechnology sector might want to give this fund a closer look.