Please ensure Javascript is enabled for purposes of website accessibility
Log In Help Join The Motley Fool
Free Article Join Over 1 Million Premium Members And Get More In-Depth Stock Guidance and Research
By Sean Williams - Updated Jun 29, 2018 at 11:08AM

Where did the more than $3.8 trillion apportioned in the federal budget for fiscal 2016 wind up? Wonder no more...

Earlier this week, President Barack Obama unveiled his final budget proposal (for fiscal 2017), which would begin on Oct. 1, 2016. The president's plan calls for a whopping $4.1 trillion budget, and a deficit that would top $600 billion.

Obama's plan has a number of key points that are likely to draw bipartisan support, including funds apportioned to fighting terrorism, and an increase in the amount being set aside for cybersecurity. Of course, there were also a number of issues that the Republican-led Congress will likely take issue with, including a $10.25 per-barrel tax on internationally imported and domestic oil, as well as increased taxation on the wealthy. 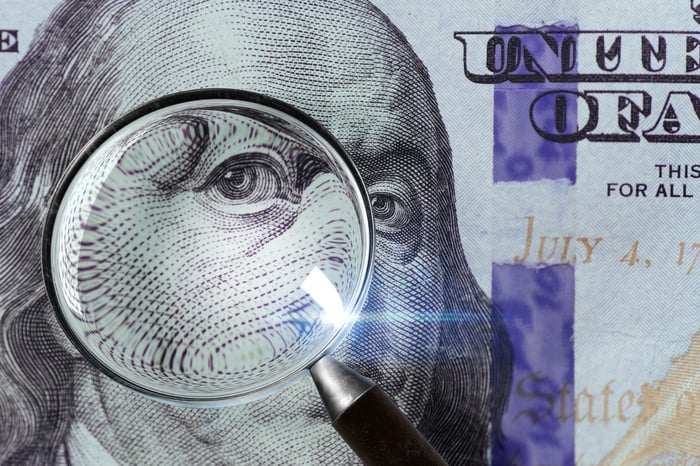 Where does the money really go?
But if we've learned anything from past budget proposals, it's that what President Obama proposes, and what Congress eventually passes, are rarely the same bill. If you want to get a good representation of what the federal budget looks like in the U.S., you need to be able to look in the immediate rearview mirror -- in this instance, the fiscal 2016 budget, which was passed in May, and totaled a cool $3.871 trillion!

Where exactly does all of the money apportioned in an approved federal budget go? This is a question asked regularly by millions of Americans, and the answer isn't always easy to find. However, courtesy of data from the Office of Management and Budget, we can get a pretty detailed breakdown of where these trillions are being spent. As an American citizen and voter, it's important to have a good understanding of where the money is flowing; as investors, we also benefit from knowing which industries and sectors are seeing large amounts of cash inflow.

Let's take a closer look at how the federal government is spending money during fiscal 2016.

Healthcare: $1,107,446,000,000
Nope, your eyes aren't deceiving you; healthcare really accounts for more than $1.1 trillion of the federal budget this year. The cause? It's primarily entitlement programs such as Medicare -- which predominantly covers the elderly -- and Medicaid -- which covers low-income individuals and their families. Medicare and Medicaid, along with CHIP, the Children's Health Insurance Plan, eat up $955.2 billion of the $1.107 trillion healthcare budget. Keep in mind, Medicaid's expansion in 31 states under Obamacare -- officially the Affordable Care Act -- has expanded the annual cost of the program.

Social Security: $944,338,000,000
Surprise! Entitlement programs require a lot of spending. As a single entitlement program, Social Security takes the cake, with more than $944 billion in budgeted spending in fiscal 2016. Remember, as baby boomers move into retirement, this figure is going to expand very rapidly.

It's also intriguing to think about our nation's entitlement programs this way: Social Security, Medicare, and Medicaid collectively account for $1.9 trillion in annual spending, or basically half of the entire budget!

National defense: $615,515,000,000
No surprises whatsoever here, with U.S. military spending dwarfing that of every other country in the world. But how does this $615.5 billion break down a bit further?

Almost $251 billion is to pay for ongoing military operations across the world, as well as cover the cost of new equipment and supplies. A little more than $148 billion is used to pay the salaries of the United States' military personnel. Finally, $216 billion is used in "other" areas of national defense, which would include rapidly growing industries like cybersecurity, and presumably includes funds for federal agencies like the CIA and NSA.

Income security: $546,350,000,000
Entitlement programs may help protect our nation's seniors, and ensure that low-income individuals and their families have access to medical care, but an additional $546 billion in other forms of income securities were also apportioned in the fiscal 2016 budget.

For example, about $108.3 billion has been set aside for food and nutrition assistance programs that ensure lower-income households have the ability to buy food. Another $51.6 billion assists lower-income families with affordable housing. You'll also find $43.7 billion in income security devoted to paying out unemployment compensation.

Beyond these three categories, another $260 billion is set aside for a variety of programs, including education and child care. Finally, $82.8 billion is used to cover Earned Income Tax Credits and Child Care Tax Credits, which are key tax breaks for low-income households.

Net interest: $283,049,000,000
Someone clearly wasn't present on the day they taught the merits of compound interest in school. With well over $18 trillion in national debt, the 2016 fiscal budget apportions $283 billion just to pay interest on our nation's outstanding debt. As the amount we owe as a nation increases, the amount the President and Congress need to budget for net interest each year will likely increase, too.

Veteran benefits: $180,324,000,000
In addition to $148 billion being spent on the salaries of military personnel, some $180 billion is also set aside to care for veterans of our Armed Forces. Included in this funding is nearly $90 billion apportioned for income and housing support, which may also include access to job training. Of the remainder, $66 billion is used to cover healthcare expenses for veterans, and $24 billion is used for a multitude of "other" purposes.

Education and job training: $106,342,000,000
A sizable chunk of the $106.3 billion apportioned here -- $47.9 billion -- is used to train, or retrain people so they can find work. Employers are becoming more specific about the skill sets they're searching for in today's economy, so this funding is designed to help the unemployed land a job.

Transportation: $98,742,000,000
There's nothing fancy with the $98.7 billion apportioned to the transportation industry. The federal government's goal is to see this funding used to improve bridges, ports, highways, mass-transit systems, and trains around the country. Ultimately, these improvements should lead to an increase in commerce.

International affairs: $55,951,000,000
Think of international affairs as having a two-pronged approach. First, we have more than $25 billion set aside annually to assist overseas nations when it comes to food and health issues. A good example here would be the threat of the Zika virus spreading. Some of these funds could be used now -- or in future budgets -- to mitigate the spread of this disease in foreign countries. Another $16 billion is apportioned to economic development in areas like Central America.

The other component provides for more than $14 billion to be spent on providing necessary resources to help our allies fight our enemies, such as ISIL. This security assistance provides an added boost for our troops overseas.

Natural resources and environment: $44,311,000,000
The $44 billion set aside for natural resources and environment needs is pretty evenly split between water and land management ($22.3 billion) and pollution control ($21.4 billion). The purpose of this funding is to ensure communities have sustainable ecosystems, as well as hold businesses and consumers accountable for their carbon footprints.

Immigration and federal law enforcement: $38,645,000,000
Here we have yet another category with no major surprises. The $38 billion-plus set aside in fiscal 2016 helps finance immigration-control efforts, as well as covers expenses of the federal judicial system, and federal law enforcement. This is a highly contentious category when it comes to future spending based on the various stances we've observed from the remaining presidential candidates.

Other government programs: $35,075,000,000
If you buy into the Independence Day movie theory that the U.S. government is spending $30,000 on a toilet seat, or $20,000 for a hammer, then this is the category you'd see those expenses. The federal government has about $35 billion in "miscellaneous" expenses in 2016, and while the budget doesn't detail the specifics of these programs, this money is likely being used to pay government administration salaries.

Response to natural disasters: $15,435,000,000
Finally, the $15.4 billion here heads to the Federal Emergency Management Agency, which can use the funds post-disaster, or can tap funds prior to a disaster to mitigate its impact.

And for those of you with an aversion to words, here's a handy chart detailing where the money goes: Graph by author. Data source: Office of Management and Budget.

Did any of these numbers surprise you? Share your thoughts below.