Savings demands by its largest customer could dent the pharmacy benefits manager's earnings in 2016 and beyond.

It's been a rough start to the year for Express Scripts (ESRX), with its stock falling more than 20% so far in 2016. 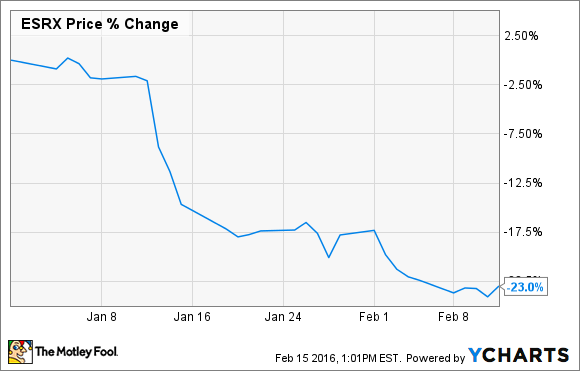 The pharmacy benefits manager's largest customer, Anthem (ELV 0.19%), is threatening to leave unless Express Scripts forks over billions in additional savings. Investors will be looking for an update on this situation -- as well as how well the company's financial results align with management's prior forecasts -- when Express Scripts reports its fourth-quarter financial results on Feb. 16.

2015 fourth-quarter and full-year actuals versus guidance
In its third-quarter earnings press release, Express Scripts' management raised its adjusted earnings per share guidance from a range of $5.46 to $5.54 to a range of $5.51 to $5.55, representing year-over-year growth of 13% to 14% over 2014. For the fourth-quarter specifically, management expects adjusted EPS of $1.54 to $1.58, which would be an increase of 11% to 14% from the year-ago period.

Investors will likely want to see adjusted EPS growth of at least 12% in the fourth quarter, particularly since Express Scripts recently reaffirmed all of its 2015 financials in December.

2016 financial outlook
More important, investors will be looking for any changes to Express Scripts' 2016 financial guidance. The company issued its initial outlook in December, including:

However, in January, Anthem CEO Joseph Swedish mentioned during his presentation at the J.P. Morgan Healthcare Conference that his company was seeking an additional $3 billion in annual savings as it looks to rework its deal with Express Scripts.

Anthem, which operates Blue Cross and Blue Shield plans in 14 states, is Express Scripts' largest customer and accounts for about 14% of its revenue. And as my colleague Keith Speights points out, if Express Scripts were to submit to Anthem's demands, it would likely be forced to slash its profit forecast. Even if a compromise is reached, Express Scripts still may need to reduce its earnings guidance if the terms it agrees to turn out to be more favorable to Anthem than previously expected. Most important, the structure of this deal will have major ramifications for Express Scripts' contracts with its other customers in the years ahead.

With so much at stake, investors will be eager to hear more about the Express Scripts' ongoing talks with Anthem during the company's upcoming conference call.

How to access Express Scripts' results
Express Scripts will announce its fourth-quarter financial results on Tuesday, Feb. 16, after the market closes at 4:00 p.m. ET. Investors can tune in to its live conference call, where management will discuss the quarter's results at 8:30 a.m. ET on Feb. 17. Both the release and a link to the conference call will be available at the company's investor-relations website.

Joe Tenebruso has no position in any stocks mentioned. The Motley Fool owns shares of and recommends Express Scripts. The Motley Fool recommends Anthem. Try any of our Foolish newsletter services free for 30 days. We Fools may not all hold the same opinions, but we all believe that considering a diverse range of insights makes us better investors. The Motley Fool has a disclosure policy.