The Oracle of Omaha has a lifetime of wisdom to share.

Investors look to Warren Buffett as one of the best investors of all time, and one remarkable thing about Buffett is that he shares his investment philosophy one soundbite at a time. With so many legendary quotes to choose from, it can be tough to narrow them down to just five. Nevertheless, we asked Motley Fool contributors to make their picks for their favorite Buffett quotes.

Steve Symington: I frowned when faced with the seemingly impossible task of choosing my favorite Warren Buffett quote. But if I'm forced to narrow his musings down to just one quip, it would be this:

"Buy a stock the way you would buy a house. Understand and like it such that you'd be content to own it in the absence of any market."

Keeping in mind Buffett also maintains his preferred holding period for any stock he buys is "forever," we're talking about a multibillionaire who still owns the same home he purchased in Omaha, Neb., for $31,500 in 1958.

But think about it. This speaks not only to the effectiveness of the long-term investing approach we so consistently laud here at The Motley Fool, but also the fact that the stocks we own aren't just tickers flying across a screen. Rather stocks represent something tangible like a home. They're pieces of real businesses, with real employees and real products that aim to generate sustainable profits and shareholder value. If suddenly the real estate market crashed or disappeared, would you be happy continuing to own your home for what it provides you in the meantime? Similarly, if you commit the same zeal to understanding (and "liking") the stocks you buy with the aim of owning them for the long haul, you'll almost certainly be much more careful in determining whether to follow through with your purchase.

That's not to say things can't change. As fellow Fool Morgan Housel wrote recently, one of the hardest parts in investing is learning to recognize the difference between patience and stubbornness -- to be able to change your mind when facts change. But if you take Buffett's advice and approach the stocks you wish to buy as you would a house, something tells me you'll need to change your mind much less often.

George Budwell: One of my favorite Buffett quips is, "There seems to be some perverse human characteristic that likes to make easy things difficult." I find this statement to be particularly true when it comes to investing in the stock market.

Although most folks can arrive at a reasonable price to pay for a vehicle, all bets are off when it comes to stocks. Instead of relying on tried-and-true valuation measures such as price-to-earnings or price-to-book ratios, investors all too often resort to blue-sky valuation scenarios that invoke complex growth stories.

The biotech industry in particular harbors numerous examples of how investors can turn something exceedingly simple into a needlessly complex mess. For example, MannKind Corp.'s (MNKD -1.39%) market cap surged to around $4 billion heading into the FDA approval of its inhaled insulin product, Afrezza, back in 2014: 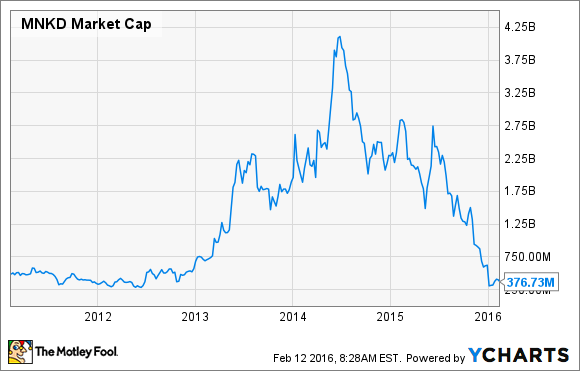 In retrospect, though, the market was clearly not valuing this biotech in an efficient manner based on how this story ultimately played out. Worse still, investors that remained faithful to the Afrezza blockbuster-in-waiting narrative were treated to a whopping 90% drop in MannKind's share price from its former highs.

The bottom line is that investing in biotechs doesn't have to be difficult. The "trick" is to buy companies with top notch management teams, solid balance sheets, and strong growth prospects for the long-term. It's as simple as that. The trouble starts when people ignore these simple valuation measures and replace them with highly improbable growth stories like those surrounding Afrezza.

Jason Hall: One of my very favorite Warren Buffett quotes is, "Someone is sitting in the shade today because someone planted a tree a long time ago." For me, this quote sums up Buffett's approach to investing and business-building better than any other.

Building something very large, like the savings you'll need for retirement, takes a long time to do. And just like an oak tree growing from an acorn, much of what happens in between the planting of the seed, and the benefit of the shade it gives decades later, doesn't require very much human intervention -- to the contrary, too much meddling by people can keep the tree from reaching its maximum potential.

The same thing happens when we meddle too much with our portfolios. Just like a tree left stunted from excessive pruning, your returns can get cut short from too much active trading, versus a steady, buy-and-hold approach that's based on owning great businesses, and letting them grow.

If you want to have it made in the shade down the road, remember Buffett's words, and let the trees you plant grow. That mostly means planting high-quality seeds in fertile soil, then getting out of the way.

Sean Williams: The Oracle of Omaha has no shortage of quotes and one-liners that serve as teaching points for investors young and old, but a personal favorite of mine has always been this:

"You only have to do a very few things right in your life so long as you don't do too many things wrong."

This is a simple yet profound quote that reminds investors that they don't have to be perfect. Although it contradicts perhaps the best-known Buffett quote that in a nutshell says to "never lose money," deep down Buffett understands full well that no investor is going to be perfect. Your goal as an investor shouldn't be perfection, so much as to find a couple of grand slams that you can ride for a decade or longer that return multiple times over for you.

On one hand, Buffett reminds investors to hang onto well-run businesses with competitive advantages for a long time. For example, investors who sold Netflix (NFLX -1.44%) between 2011 and 2012 looked like geniuses as the company lost a substantial amount of market value as it transitioned away from a static DVD model and into streaming. However, for those who hung on they've been rewarded with Netflix hitting levels that were three times its high point from 2011. The lesson is simple: if the investing thesis hasn't changed, and the competitive advantages are still there (which for Netflix is its superior customer base, streaming infrastructure, licensing deals, and exclusive content), then you have no reason to sell.

On the opposite end of the spectrum, don't hesitate to sell at a loss if the investing thesis has changed. Even Buffett took one on the chin with grocer Tesco after it failed to turn things around. But, even dozens of Tesco-sized losses can be wiped out, and some, by one Netflix-sized gain. Keep that in mind.

Dan Caplinger: One of my favorite Buffett quotes deals with reputational risk: "It takes 20 years to build a reputation and five minutes to ruin it." The Oracle of Omaha has frequently based his investment choices on the integrity of the people running the business, and his ability to find leaders with vision who are unwilling to take ethical or moral shortcuts to achieve their goals has earned Buffett a following among socially responsible investors.

For Buffett, that reputation has earned him investing opportunities that no one else can match. On multiple occasions, companies in financial trouble during the financial crisis turned to Buffett for last-gasp capital infusions, and those investments turned out well for Buffett and his shareholders.

Yet it's also something that other companies should strive to keep in mind and follow. On many occasions, companies that had stellar reputations for quality found themselves in trouble, and what they did next helped define the future course of their business. For lululemon athletica (LULU -0.10%), which had quality-control issues with its yoga pants, mishandling of the situation led to years of reputational damage. By contrast, Chipotle Mexican Grill (CMG -0.60%) has dealt with its recent foodborne-illness troubles by giving customers every incentive to keep visiting its restaurants. In the end, what you do with your reputation is as important as building it in the first place.