On the ground, safe and sound. Sorta. Image source: NTSB.

Boeing (NYSE:BA) shares crashed to earth this week, falling as much as 12.3% in intraday trading Thursday after Bloomberg reported that the company has come under investigation by the SEC.

Citing unnamed sources, Bloomberg says a whistleblower has sicced the SEC on Boeing, where it will dig into "programmed accounting" practices. That sounds scary, but what it basically means is that the regulator is questioning how Boeing calculates the development costs on its 787 Dreamliner and 747-8 jumbo jet, how Boeing applies those costs to the revenues it receives for selling the planes over time, and how it comes up with a resulting number for the profit it earns on each airplane.

Simply put: Boeing does it one way; the SEC thinks maybe they need to do it differently.

Sharks in the water
The lawyers, of course, began circling immediately. Four separate class action suits have already been filed, and more are probably on the way. And yet, despite the bad news, Boeing's stock ultimately bounced Thursday, recovering about half its losses.

Thursday's losses, that is. You see, this was actually the second time in as many weeks that Boeing stock got shocked. On Jan. 27, Boeing sold off by nearly 9% after the company reported Q4 earnings that featured a big one-time charge related to a production cut in the 747 jumbo jet. Combined with a more generalized sell-off in stocks earlier this year, Boeing's two "incidents" have erased more than 25% of Boeing's market cap in less than two months. 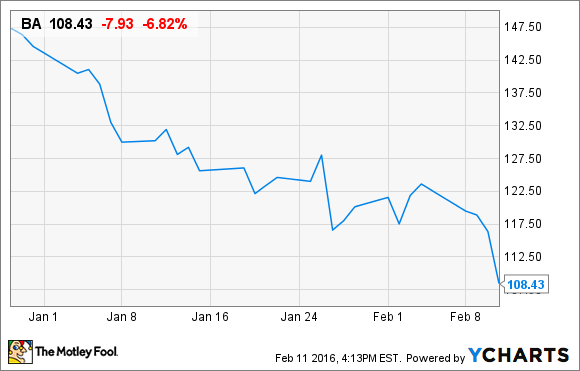 For investors, this is terrific news.

Black is white, up is down, and Boeing is cheap
Oh, I know it doesn't feel that way. No one likes to see their stock go down. On the flip side, though, while any Boeing shares you own today are worth less, it's getting awfully cheap to buy new Boeing shares thanks to the 25% reduction in price.

Could the stock go down more? Of course it could. I don't mean to minimize the risk of an adverse outcome from the SEC investigation. But as one of Bloomberg's sources told the media outlet, program accounting rules are "complex and there are few black-and-white rules governing how companies apply program accounting." That's going to make it tough for the SEC to show Boeing did anything wrong -- potentially tough enough that after making a few inquiries, the SEC won't even try, and will drop the investigation without filing charges.

Meanwhile, irrespective of how Boeing calculates GAAP profit under its program accounting rules, the company is clearly doing a bang-up job of producing cash where it counts -- on its cash flow statement. A review of Boeing's financials on S&P Global Market Intelligence (formerly known as S&P Capital IQ) shows that last year, Boeing generated more than $6.9 billion in free cash flow from its business. That's cold, hard cash you can put in the bank -- not just accounting "profits."

Divide that free cash flow into Boeing's now-deflated $71.8 billion market capitalization, and you wind up with a stock selling for just 10.4 times FCF, growing its profits at 9% annually (according to S&P's estimates), and paying a generous 3.7% dividend yield to boot.

That's a very nice valuation on Boeing stock. It's even nicer when you notice that, with so much cash pouring in, Boeing now has $2 billion more cash than it has long-term debt on its books. Accordingly, the stock is actually even cheaper than its market cap makes it look.

The upshot for investors
My very rough and ready valuation on Boeing, arrived at by multiplying the stock's total expected return (long-term growth rate plus dividend yield) times its free cash flow, gives me a fair value of about $87.6 billion on Boeing stock. That's based on what we know today. If the SEC digs up something scary, I'll be sure to let you know. But for now, I see a 25% profit opportunity in Boeing stock.

Once this SEC business is out of the way, Boeing stock should be free to fly high. Image source: Boeing.