As competitors report disappointing numbers, SunPower exceeded its own expectations.

It's been an up and down couple of months for the solar industry, and depending on where you stand the changes in the market have been either good or bad. In December, the solar investment tax credit (ITC) was extended, keeping intact the industry's most important subsidy. But late in December Nevada's Public Utilities Commission changed its net metering policies, effectively killing the residential solar industry overnight.

When SolarCity reported earnings last week, it disappointed investors on both Q4 2015 installations and Q1 2016 guidance. SunPower's (SPWR -1.95%) earnings told a different story, and in 2016 it may start taking business away from none other than SolarCity.

The numbers
Q4 2015 was always going to be a big quarter for SunPower. It dropped its 135 MW Quinto project down to 8point3 Energy Partners (CAFD), leading to about a $900 million payment from the yieldco. But SunPower completed about $65 million of EBITDA in projects ahead of the potential ITC expiration, leading to a solid beat of its own guidance.

You can see below that top and bottom line results easily beat guidance on the projects pulled forward in the quarter.

It's worth noting a few things from these great results. The first is that management didn't change what it said it would earn from Q4 2015 thru Q4 2016, so the $65 million of EBITDA in projects was more of a timing change than anything.

You'll also notice the huge disparity between GAAP and non-GAAP numbers. This has to do with the way 8point3 Energy Partners dropdowns are accounted for. The table below gives an explanation of how dropdowns are treated in detail. Basically on a GAAP basis dropdowns get no credit immediately -- despite an immediate cash payment -- and on a non-GAAP basis full revenue is recognized but a portion of gross margin is deferred based on SunPower's 41% ownership stake in the company. 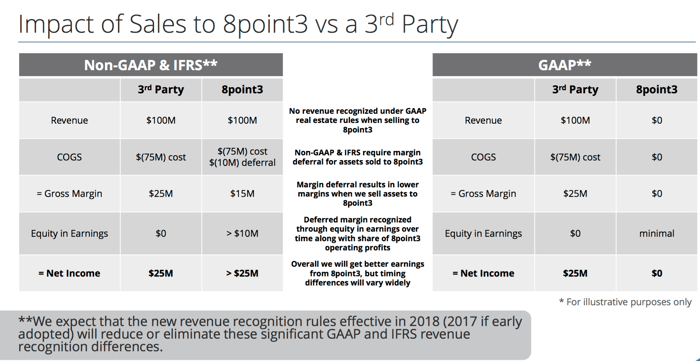 Most of the time, when a company reports non-GAAP numbers, it's making big adjustments that are highly favorable to the company. In SunPower's case, it's actually a better gauge of value creation because GAAP results don't even account for the cash SunPower has already received from project sales.

How is production expansion going?
Before earnings were released, I wrote that I was more curious about module expansion plans than about fourth quarter results.

I asked CEO Tom Werner on Wednesday if he expects that increased panel production to lead to a greater percentage of self-developed projects, especially in emerging markets where the P-Series panel will be used. He couldn't predict how the mix would play out in coming years, but did say SunPower had just started a components business that will sell full system components along with panels. If you look at the fully integrated products the company has launched, or will soon launch, in residential, commercial, and utility scale solar, this makes a lot of sense. Even if SunPower isn't the project developer, it can leverage its standard designs to increase sales to developers in the future.

A bright future in solar
As the solar industry transitions to a more mature business, there's a lot to cover for investors. In the near future, I'll cover SunPower's explosive pipeline growth, how it's taking share in residential solar, and why we should expect margin growth in the future. For now, we know that Q4 2015 was even better than expected, and 2016 should be the beginning of a big growth curve for the company.

Travis Hoium owns shares of 8point3 Energy Partners LP and SunPower. The Motley Fool owns shares of and recommends SolarCity. Try any of our Foolish newsletter services free for 30 days. We Fools may not all hold the same opinions, but we all believe that considering a diverse range of insights makes us better investors. The Motley Fool has a disclosure policy.