In its twentieth year in business, Under Armour (NYSE:UAA) has a come a long way from the niche company that sold moisture-wicking shirts targeted at football players. Today, depending on the ups and downs of the stock market, Under Armour is either the second or third largest sports apparel and footwear brand.

Although it's difficult to call Under Armour an underdog anymore, the company doesn't appear to be content with second or third place. Its fourth quarter results were impressive, showing meaningful year-over-year revenue growth in all parts of its business:

Let's take a closer look at the primary growth drivers.

The success of Under Armour's footwear business can be summed up in two words: Stephen Curry. The NBA MVP's signature shoe was released early in the fourth quarter, and the effect it had on footwear revenue was a lot like Curry's basketball skills -- ridiculous. 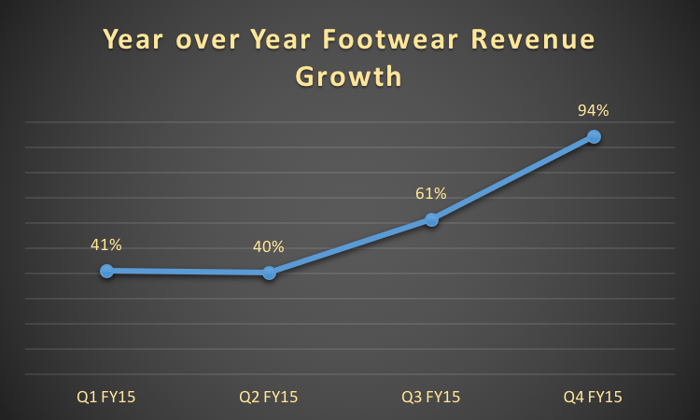 At $678 million, Under Armour's footwear revenue in 2015 accounted for 17% of the top line. Just five years ago, footwear revenue was $182 million and 12% of total revenue. The company's vision is to have its footwear business grow larger than the apparel segment. It's still too early to know if the company can get there, but the momentum is certainly building in their favor.

International
At a time when a China slowdown is giving the global markets the jitters, CEO Kevin Plank opened the fourth quarter conference call by saying, "I want to wish you all a belated Happy New Year and wish those in China an early Guonian Hao."

The importance of the Chinese market is not lost upon Under Armour's management team. In fact, its signature basketball shoe, the Curry Two, was released six weeks ahead of the North American launch. Although Under Armour doesn't break out sales in China, Plank did mention triple-digit growth across greater China. Also, Under Armour's first $1 million revenue day came on Singles' Day, the Chinese equivalent of Black Friday.

As for the rest of the world, Under Armour has stepped up its game to become a truly global business. Over the past year, international sales grew 69% to nearly half a billion dollars. After years of being known as a North American brand, the contribution of international revenue to the overall business has accelerated significantly since 2013. 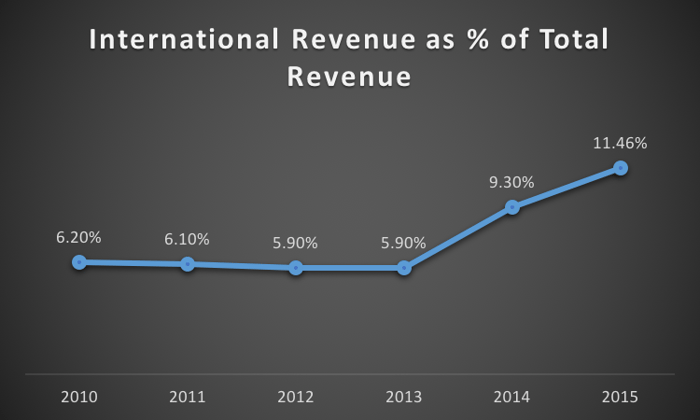 Under Armour's goal is to generate 18% of its revenue from outside North America by 2018. It is still far behind Nike, which derives 49% of its revenue abroad, but the pace of international sales growth is impressive.

The struggles of brick-and-mortar retail have been well documented, and the success of many retail brands is becoming more dependent on the transition to an omni-channel strategy. Under Armour has done a nice job of reducing its dependence on traditional retail channels. 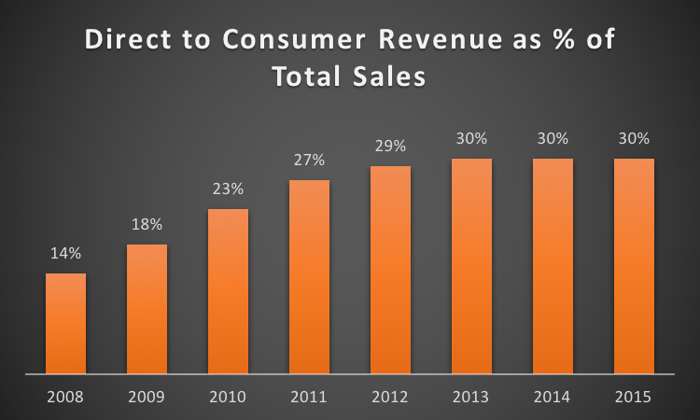 Mobile visits also account for almost 50% of traffic to the Under Armour site, and the company hopes to expand its digital presence with Connected Fitness, the world's largest digital health and fitness community. Last year, approximately 150 million users of Under Armour's fitness applications logged two billion activities -- data the company hopes to utilize to better understand consumers and boost sales.

Under Armour's revenue came in at $4 billion in 2015. At $32 billion in revenue for Nike and $18 billion for Adidas, Under Armour has a long way to go in catching up to its most formidable competitors. However, continued momentum in its footwear, international, and direct-to-consumer businesses will help close that gap in the coming years.