Please ensure Javascript is enabled for purposes of website accessibility
Log In Help Join The Motley Fool
Free Article Join Over 1 Million Premium Members And Get More In-Depth Stock Guidance and Research
By Matthew DiLallo - Feb 19, 2016 at 10:25AM

Catalysts to keep an eye on.

Like most oil companies, the past year has been tough on EOG Resources (EOG 3.19%). With oil prices slumping, the company slammed the brakes on growth and has spent much of the past year just focused on driving its costs down so that it can run on a much lower oil price. This transition period has weighed heavily on its shares, which are down more than 30% over the past year. However, while it might be down, there are three catalysts to keep an eye on that could cause the stock to rise.

1. Oil prices finally start to recover
It all starts with oil for EOG Resources. As the following chart shows, its stock price is pretty directly correlated to the price of crude: 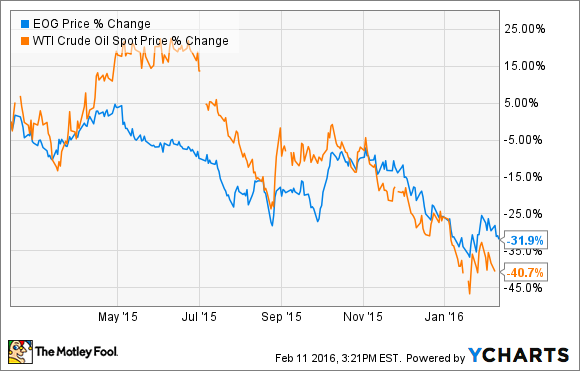 Because of this, if crude oil rallies, it will more than likely take EOG Resources' stock with it. A higher oil price is something that EOG Resources sees in the future, with CEO Bill Thomas recently telling attendees at a conference that "nobody believes that current prices are sustainable."

The problem is that even though the current low prices can't last forever, it will take time for industry conditions to improve. However, Thomas pointed toward the 40% that U.S. producers are cutting capex this year as a sign of things to come. Because of that deep cut, "U.S. production is really going to fall quite substantially," according to Thomas and that will eventually lead to higher oil prices.

2. Investors get excited about a large acreage acquisition
While EOG Resources' stock lives and dies with the oil price, there are a couple of other catalysts that could drive the stock higher if oil were to stabilize. One of those is a big acreage acquisition, which it is eager to do.

While EOG Resources isn't a fan of corporate M&A, it does like the idea of strategic acreage acquisitions. Last quarter, for example, the company acquired 26,000 acres in the Delaware basin in three separate transactions, paying $368 million to bolster its position in that play. However, it doesn't appear to be done shopping, with Thomas recently saying that "there's no better time to pick up acreage than when the industry is at a low point."

That being said, the company needs to make the right deal at the right price in order for investors to get excited. We need to look no further than Devon Energy's (DVN -1.77%) December buying binge to see what happens when a company is viewed to have overpaid in this market. Devon Energy made two deals, paying $1.9 billion for 80,000 net acres in the STACK play of Oklahoma and another $600 million for 253,000 net acres in the Powder River Basin, which it saw sharpening its focus on those two emerging core plays.

Investors and analysts, however, saw it as a gross overpayment because the transaction value was based on future potential and not the current market realities. That's why Devon Energy's stock has sold off so steeply since those transactions were announced: 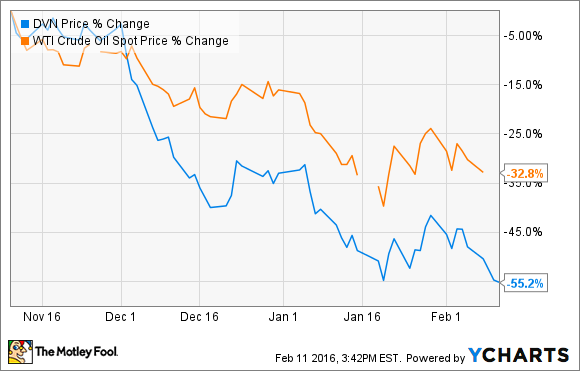 3. Continue to do more with less
EOG Resources spent most of the downturn focused on improving its operations. It has continued to improve its well productivity while at the same time driving down costs. Last quarter, for example, production was ahead of its guidance while its operating costs dropped 5%. That said, the company still has some room for improvement and its ability to capture those improvements will be key to its ability to be successful in a low oil price environment should prices stay lower for longer.

One evidence of its ability to do more with less will be its 2016 capex plan, which should be released when the company reports earnings later this month. More than likely, it will continue its aim to keep its production flat. The question is if it will be able to generate enough cash flow at a sub-$30 oil price to do so. If it announces a capex budget that keeps its production flat and stays within cash flow, it would be a big sign to investors that it can run just fine on a sub-$30 oil price.

Investor takeaway
EOG Resources' stock price might be down, but it's not out. The company has a number of catalysts that could fuel a rebound in its stock, with oil by far the biggest. That said, while it waits for oil to rally, EOG Resources can busy itself with finding discounted acreage to buy as well as continuing to drive down its costs, both of which could cause the stock to start heading higher.