With quite literally thousands of stocks and exchange-traded funds (ETFs) populating today's investing universe, it can be difficult to know where to get started. To help separate the wheat from the chaff for those new to picking stocks on their own, our Foolish contributors discuss why they think Costco Wholesale (COST 0.94%), S&P Depository Receipts (SPY 1.69%), and Johnson & Johnson (JNJ -1.10%)belong in any rookie's portfolio.

Evan Niu, CFA: If you're new to investing, it's always good to pick a strong company with a simple business model -- it makes following the company that much easier. That's why I'd suggest Costco Wholesale, a longtime Fool favorite for precisely its simplicity. Costco's business model is extremely straightforward. The company operates a large network of warehouse stores that offer compelling prices and savings for members that pay an annual membership fee.

Costco's markups are very modest for a retailer, and its gross margin essentially just covers operating expenses. For instance, last quarter the company generated a gross profit on merchandise of $3 billion, which was just slightly more than its selling, general, and administrative expenses of $2.8 billion. The real money is in the membership fees. Last quarter's $593 million in membership fees accounted for the bulk of the $767 million in operating income.

This is precisely why Costco cares so much about member satisfaction. It's far more important to keep members happy by keeping merchandise prices low, as opposed to other retailers that rely on gross profits from merchandise. Costco also enjoys some pricing power because it delivers so much value to members. Members hardly noticed when Costco increased its membership fee by 10% a few years back, from $50 to $55. It's not hard to recoup that $5 over the course of the year in merchandise savings.

Costco deserves a place in any novice investor's portfolio.

Andres Cardenal: When you are making your first steps in the market, you should probably focus on playing it safe and positioning your capital behind solid investment alternatives. Since you don't have much experience at handling risk, it's important to build a portfolio that will allow you to sleep soundly at night. Unfortunately, many investors start with a relatively small amount of capital, and this doesn't allow for adequate diversification.

With this in mind, an ETF such as S&P Depository Receipts could be a smart choice for beginning investors. The ETF tracks the performance of the S&P 500 index, arguably the most popular and widely recognized stock market index in the world.

The portfolio is comprised of 500 of the biggest companies in the U.S., and it offers wide diversification across different sectors of the economy. Sectors such as information technology, financials, healthcare, and consumer goods are represented in S&P Depository Receipts, and the ETF has a conveniently low annual expense ratio of 0.11%.

Stock prices are impossible to predict in the short term, especially since we are going through times of increased economic turbulence across the world. However, chances are that the companies included in S&P Depository Receipts will deliver growing cash flows in the long term, and this makes the ETF a good alternative for beginning investors trying to keep risks under control.

George Budwell: I think Dividend Aristocrat Johnson & Johnson is a solid pick to kick off your investing career. This diversified healthcare giant offers a 53-year history of consecutive dividend increases, a top-notch balance sheet, and the most productive pharmaceutical pipeline in the industry in terms of new drug approvals over the last five years.

Taken together, these three factors have helped J&J's stock navigate this turbulent market so far this year without a major drop-off in its share price: 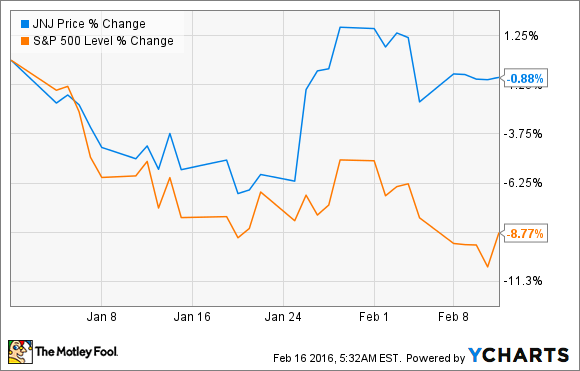 This feat is particularly impressive in light of the serious headwinds facing J&J at the moment -- such as the negative impacts of a strong dollar on its top line, the threat of generic competition to its top-selling anti-inflammatory medicine Remicade, and the ongoing nosedive in the sales of its relatively new hepatitis C drug Olysio due to the release of superior competing products.

Instead of dwelling on the negatives, investors are apparently willing to give J&J the benefit of the doubt due to its strong clinical pipeline that boasts 10 potential blockbuster products, along with its recent venture into the high-growth robotic surgery market.

All told, I think J&J is a no-brainer pick for investing rookies because of its stellar growth prospects going forward and lengthy track record of rewarding long-term shareholders.