Here are three stocks that have insane valuations, either seemingly too high or too low.

Crazy valuations can go both ways. Sometimes, stocks look incredibly cheap or expensive, which can prove to be opportunities to jump in or get out. The real question is always whether the market is right or if shares are being mispriced because of market inefficiencies.

Here are three stocks that have insane valuations.

Brian Feroldi (Under Armour): There are plenty of reasons to be bullish on Under Armour's (UAA -2.61%) stock. The company has built an amazing brand from scratch that has allowed it to produce revenue growth of at least 20% for more than six years running now. Better yet, its management team recently predicted that its growth rate would actually accelerate between now and 2018 to more than 25% annualized. It's also seeing huge success in every product category that it competes in, such as apparel, footwear, and accessories, and it's even made a big bet that has made it the biggest player in connected fitness. Add in the fact that the company is still run by Kevin Plank, its dynamic founder who is one of the most competitive CEOs out there, and I think the company's growth trajectory looks terrific.

Yet despite everything the company has going for it, I'm constantly baffled by the way the market values Under Armour's stock. The company regularly trades at a P/E ratio that is many multiples higher than its direct peers, and even after its recent 30% sell-off its shares are still fetching nearly 70 times trailing earnings estimates. Looking out to 2017 doesn't help the situation much, either, as it's still trading for more than 42 times next year's profit targets. That just seems like an absurdly high price to me, and these numbers are after a 30% decline.

Don't get me wrong. I wouldn't dare bet against Under Armour's stock, and selling a portion of my position in 2011 on valuation concerns was one of the worst investing decisions I've ever made. For that reason I plan on holding on to my remaining shares for years on end regardless of the valuation, and I'd happily add to my position if Under Armour's stock continued to fall.

Still, this is one company for which I just can't wrap my head around the valuation.

Jason Hall (Chart Industries): I'm taking a contrarian approach and writing about a stock that has become, at least to my eye, outrageously cheap. Here's a look at a handful of valuation metrics for Chart Industries (GTLS 1.19%) over the past several years: 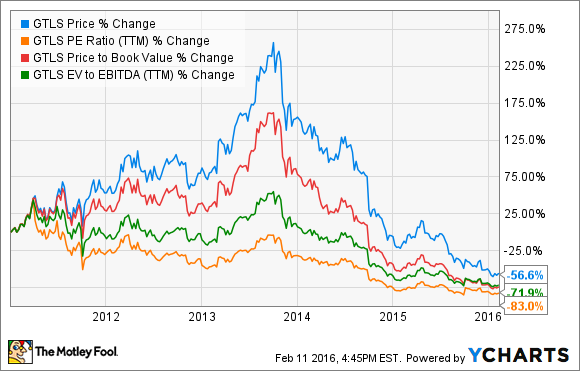 Chart's stock is down by more than half since the start of 2011, even after a massive run-up in 2013 at the height of investor frenzy to buy anything end everything associated with natural gas, especially in China. And while that story hasn't played out very well, or very quickly so far, the market has -- as it often does -- swung the pendulum too far in the opposite direction over the past six months or so.

As its stands today, Chart Industries sells for about half of its book value and carries a price-to-earnings ratio about half that of the S&P 500. By essentially all of its valuation metrics, Chart Industries is cheaper today than it has been at any time since during and right after the Great Recession: 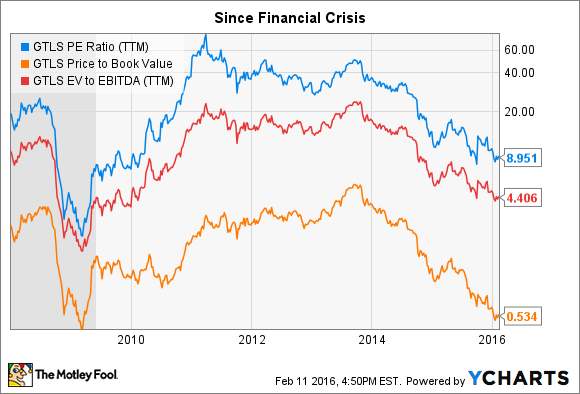 Moving beyond metrics, Chart is a solid business. The company has been around for over a century and has a diversified business with exposure to multiple industries beyond just energy. Chart also generates steady cash flows and carries very little debt.

Sure, it may not have turned out to be a huge growth stock, but that doesn't mean it deserves to be on the garbage heap. It may take a while to recover, but when it does, investors should do quite well to buy this outrageously cheap stock.

The market is pricing in significant growth in the years ahead, and Tesla needs to execute on the $35,000 Model 3 to deliver on those growth expectations. There is plenty of execution risk going forward, and any missteps will be punished badly, which is the case for any high-multiple stock. That also means the years ahead will be incredibly volatile, as the market tries to figure out if Tesla is worth it or not. The premium valuation has already attracted plenty of short sellers. Short interest is an incredible 29% of float. Tesla is a battleground stock, through and through.

I'm very much a Tesla bull. Tesla is my largest holding, after all. But frankly, the valuation still terrifies me.