The jurist's passing calls into question the future of some of the most important court decisions made on gun rights.

The shock over the sudden death of U.S. Supreme Court Associate Justice Antonin Scalia quickly gave way to political enmity as it was immediately understood the ramifications his demise has for future court decisions.

The court is set to rule on a number of cases that hold important outcomes for individuals and business, but it's the outcome of future cases after a justice has been appointed to fill the vacancy where the biggest questions loom.

And arguably there is no more contentious issue that may make it to the Supreme Court than those about gun rights and the implications such decisions will have on Smith & Wesson Holding (SWBI 0.19%), Sturm, Ruger (RGR 0.69%), and the other firearms manufacturers.

The seminal case on gun rights
In fact, one of Scalia's most influential decisions was District of Columbia v. Heller, a ruling that established the absolute constitutional protections afforded an individual and his right to purchase and own firearms.

Where the city government had made it virtually impossible for a person to legally own a gun, Heller held that "The Second Amendment protects an individual right to possess a firearm unconnected with service in a militia, and to use that arm for traditionally lawful purposes, such as self-defense within the home."

That was followed two years later by McDonald v. City of Chicago, written by Justice Samuel Alito, which said the due process clause of the 14th Amendment made the federal protections outlined in Heller applicable as well to the states, meaning just as Congress could not pass laws violating the Second Amendment, neither could state or local legislatures.

Both decisions, though, were 5-4 in favor of upholding an individual's right to keep and bear arms, but a court packed with the type of progressive justices President Obama has nominated thus far would likely have a very different outcome, which is why the battle over whether Obama or the next president should fill the vacancy is likely to be hotly contested. Liberals obviously want another progressive on the bench; conservatives want to wait for the next president to have the choice of justice, undoubtedly hoping their judicial philosophy will prevail.

Fear is a powerful motivator
However, the possibility an anti-gun majority will sit on the bench sent the stocks of Smith & Wesson and Sturm, Ruger racing higher on Tuesday, as investors expect a gun-buying frenzy to follow. Their shares closed out the day 3% and 2% higher, respectively.

The firearms industry has thrived during the current administration because of fear over actions the president might take to impede lawful gun ownership. Yet no real laws were attempted, let alone adopted. Not even his vaunted executive orders did anything meaningful. 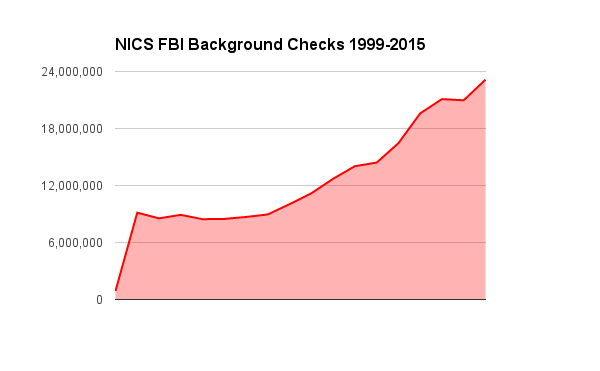 Source: Chart by author from data provided by the FBI.

Still the demand for firearms is staggering. For nine straight months now, the FBI has conducted record numbers of background checks on applicants wanting to purchase a gun. In January it performed more than 2.5 million investigations into gun buyers, more checks than during any other January since the law enforcement agency began keeping records in the late 1990s. It was higher than even January 2013, which had been the all-time record as it followed on the heels of the Sandy Hook shootings. Last month's volume is now only second to this past December, when the FBI conducted over 3.3 million investigations.

Gun buyers are not who you think
Yet the demand for guns isn't being driven by survivalists planning for Armageddon. Rather, just as Heller foretold, it's been the desire for self-defense in the home that is the single greatest impetus behind the spike in gun sales. And it's not just men, either, but women, too, seeking to level the playing field, a factor that could be key to driving future gun sales. As the Illinois Supreme Court noted in the follow up gun case of Aguilar v. Illinois, the premise of both Heller and McDonald was that "individual self-defense is 'the central component' of the Second Amendment right."

Last month, Smith & Wesson tore up the guidance it issued just the month before and said it was experiencing sales so red hot it was raising its revenues and profits forecast. Sturm, Ruger looks like it's on track, too, for yet another profitable quarter, and even Colt Defense has returned from bankruptcy in time to capitalize on the demand for weapons.

Although there is perhaps more reason for concern for the future of gun rights with the passing of Justice Scalia, it is likely not an issue that will be decided for some time to come. Because of the U.S. Senate's power over consenting to any nominee put up for consideration, the checks and balances built into the Constitution mean the outcome will almost certainly be punted till next year, though the pace of gun buying will continue unabated.