If the past several months haven't been kind to growth investors, they've been downright horrific for shares of Internet radio pioneer Pandora Media (P). 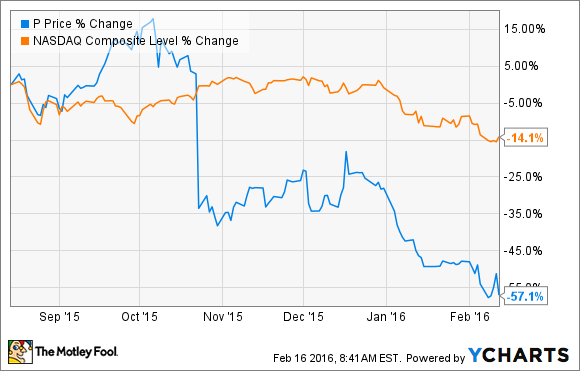 The company faces pressure from nearly every angle. Last week's mixed earnings release left investors largely uninspired, and an onslaught of competition from well-heeled rivals such as Apple (AAPL -3.00%), Spotify, Alphabet (GOOG -1.98%) (GOOGL -1.82%), Tidal, and many more paints the company as late to the global streaming gold rush headed by Apple and Spotify.

Pandora's strategic options appear increasingly tenuous, which is why the news that Pandora has retained Morgan Stanley to explore a potential sale shouldn't be a surprise. But does it make sense for Pandora?

Pandora goes shopping?
According to reporting from The New York Times, Pandora recently enlisted Morgan Stanley to kick the tires to see if any interested parties might be inclined to buy it. Pandora's efforts appear exploratory for now, but its willingness to consider removing itself from the scrutiny of public markets doesn't exactly send an upbeat signal regarding the company's outlook.

It's also not clear who might want to buy Pandora. The digital-music business believes on-demand streaming is the future of the business. Pandora is developing its own on-demand offering using the Rdio on-demand assets it purchased last year, but several smaller services, such as the Jay-Z-backed Tidal,  wouldn't carry nearly the price tag Pandora would. The existence of several smaller buyout candidates makes a music-industry buyer seem unlikely. Beyond strategic acquirers, would a purely financial buyer, such as a private equity fund, be willing to take a risky wager on Pandora? It doesn't seem to make a lot of sense, given Pandora's long-term issues with monetization.

Better off alone?
That Pandora finds itself in this situation, despite having been the first online digital-music purveyor, reflects the mismanagement of the company's strategy over the past five years. Pandora enjoyed a massive first-mover advantage to establish itself as the dominant player in this space. But a myopic focus on online radio alone allowed both Apple and Spotify to get a leg up.

Pandora finally appears to have a growth strategy that aligns it with the industry's direction. With its own on-demand service likely to launch at some point in 2016, the stage is finally set for Pandora to combine its leading online radio service with a user-guided on-demand product. What's more, moving into on-demand will require Pandora to negotiate its royalties directly with the record labels, which lays the foundation for the company to finally expand beyond its four-country geographic footprint. With Pandora's arguable edge on the radio side, its value proposition could make it competitive with Spotify or Apple Music. Much of this will come down to execution on Pandora's part.

Spotify and Apple Music's international expansion could limit Pandora's upside on the same stage, though, so things aren't all coming up roses for Pandora. For now, between the lack of an obvious strategic buyer and the possibility that its long-overdue strategic shift could take root this year, Pandora is probably best served by remaining independent in the quarters ahead.

So while the news of its possible sale makes sense in the context of its continued financial struggles, a Pandora buyout still seems like a stretch as the company continues to strive for a better future.