A 17% discount to book value sounds like it leaves room to grow -- and it does. But mind the risks.

Tuesday is looking like another ugly day on Wall Street, with major stock indexes down more than 0.8% -- and sinking. One stock bucking the tide of red ink, though, is popular mortgage REIT Annaly Capital Management (NLY 2.88%) -- up nearly 1%. But why?

The news
Eight years after the housing bust, not many of the old dividend-rich mortgage REITs retain their former glory -- but Annaly is one of the survivors. Nearly half-again as large as its nearest competitor, American Capital Agency Corp (AGNC 3.70%), Annaly pays one of the biggest dividends in the industry -- 12.1%. That's nearly as much as American Capital's 13.3% -- and lately, Annaly's stock price has been holding up better than its rivals', too.

That said, Annaly stock is still down half from its high hit in February 2008, before the big bust. And yet this morning we find analysts at FBR Capital upgrading and singing Annaly's praises -- but not American Capital's. According to our data here at Motley Fool CAPS, FBR is one of the better stock analysts out there, boasting a performance record superior to that of 85% of the investors we track. So why do they love Annaly so much?

Here are three things you need to know -- with some pretty pictures to illustrate:

1. Annaly is unprofitable
Based on its past 12 months' results, Annaly Capital is not currently a profitable operation. And yet, that may not matter much to investors. In fact, a review of Annaly's past stock performance shows that while Annaly's stock price does occasionally track earnings, sometimes, stock performance has no relation to profits whatsoever. 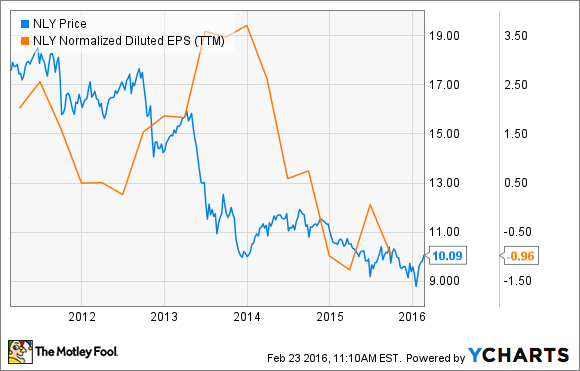 2. Book value is actually more important
StreetInsider.com quotes FBR saying: "Our rationale for [Annaly's] upgrade to Outperform includes a more defensive asset portfolio with a heavier skew toward non-credit/more-liquid agency MBS, and an attractive valuation at 83% of BV." And yes, if Annaly shares are selling for 83% more than the book value of the assets they represent, that does sound attractive. It's a big part of the reason FBR thinks Annaly shares that currently cost $10 and change could go to $12 -- a 20% improvement.

FBR could even be right. According to data from S&P Global Market Intelligence, over the past five years Annaly shares have swung from valuations as high as 1.2 times book value, to as low as 0.7. (American Capital shares are even more volatile, ranging from 1.3 times book value, down to 0.7 times, in value). Thus, 83% -- or 0.83 times book value -- is toward the low end of what we'd ordinarily expect either of these shares to fetch.

Of course, that valuation depends greatly on how Annaly's assets are valued. The better the book value, the better the stock price -- but the converse is also true: 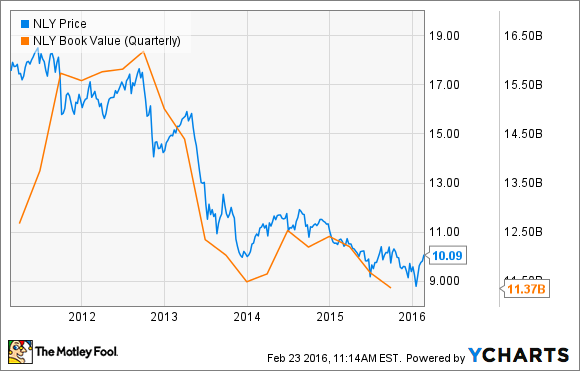 3. And dividends may be most important of all
One final chart to consider, and we'll be (almost) done. Book value is clearly important to the prospects for Annaly stock. But so, too, is the generosity of the dividend. To see how this is the case, just take a look at how Annaly's shrinking dividend has shrunk its stock price over the past five years -- and kept it in the low single digits for the past two years: 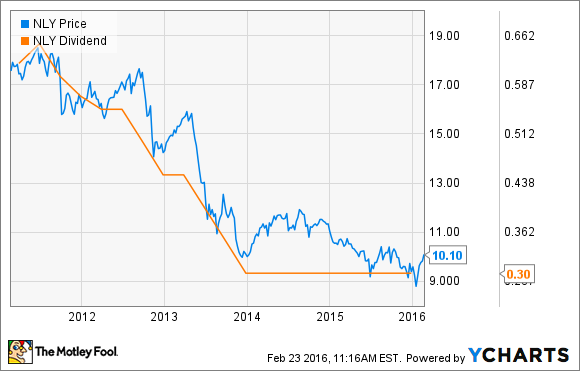 And one more thing...
One last factor you need to consider before deciding whether to follow FBR Capital's advice, and buy Annaly in preference to, say, American Capital Agency: Even if it hasn't been as hard hit as American Capital Agency, Annaly's dividend has still shrunk by half in comparison to what it paid only five years ago. And it could become even less attractive to income investors if interest rates rise.

Additionally, as my Foolish colleague Matt Frankel recently pointed out, higher interest rates work to reduce profits and shrink the ability to pay dividends at mortgage REITs like Annaly. That's a risk that FBR also highlighted in its report. And it's a reason why the Fed's intention to raise interest rates throughout 2016 poses a double risk to long-term shareholders of Annaly.

Read more about the riskiness of mortgage REITs here.