U.S. stocks are lower in early afternoon trading on Wednesday, with the Dow Jones Industrial Average (DJINDICES:^DJI) and the S&P 500 (SNPINDEX:^GSPC) down 0.79% and 0.74%, respectively, at 12:50 p.m. ET. Once again, market watchers are pointing to oil's decline as a catalyst for today's stock losses. But there's one standout gainer on stock-specific reasons: Beleaguered pharmaceutical giant Valeant Pharmaceuticals International, which is up 4.86%.

It is a reflection of just how negative sentiment concerning shares of Valeant Pharmaceuticals International had gotten last week -- so much so that the company's Monday night announcement of an earnings restatement prompted a 4.4% pop on Tuesday, with investors extending that gain today: 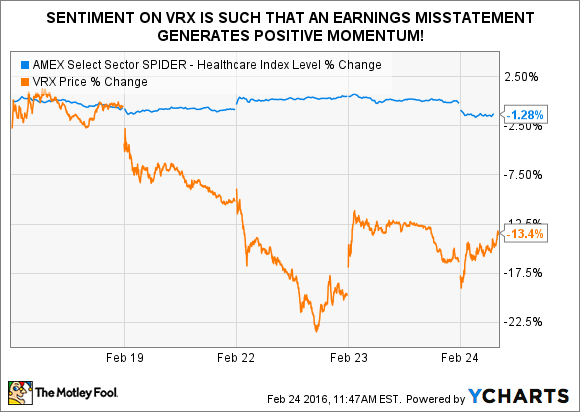 Earnings restatements are not that unusual and the amounts in question here are pretty trivial: Valeant believes that it booked $58 million in revenue in the second half of 2014 that should instead have been recognized in 2015.

But when you step back and consider the context of the restatement, it's pretty remarkable that the market is reacting positively and that gives some sense of the grim scenarios investors were contemplating.

Indeed, how did the company discover the earning misstatement? It's the result of a board of directors' committee investigation into Valeant's (odd) relationship with specialty pharmacy Philidor RX Services. The surprise revelation of this relationship badly damaged Valeant's credibility at the end of last year (not to mention its stock price).

Valeant has since severed its relationship with Philidor, forcing it to close up shop.

Second, how did this misstatement come about? According to Valeant's investigation, it's the result of the company recognizing the $58 million on delivery of product to Philidor instead of when the product was dispensed to customers.

This was the central allegation that short-seller Citron Research raised in a sensationalistic report, the publication of which caused the stock to lose nearly a fifth of its value on Oct. 21, 2015.

At the time, Valeant refuted the allegations, stating:

All shipments to Philidor and other pharmacies in the Philidor pharmacy network, including R&O, are not recorded in Valeant's consolidated net revenue. Sales are recorded only when the product is dispensed to the patient.

Valeant now says it began to recognize sales once they were dispensed to clients "following entry into the option to acquire Philidor in December 2014". (An option which itself raises a few eyebrows.)

In that context, it's difficult to see how Monday's announcement is terribly reassuring -- unless your initial expectations are worse.

It will be very interesting to see how Valeant's story pans out. One of the fascinating aspects of the story is the way in which prominent value investors became so extensively exposed to the stock, which has now become an ideal vehicle for momentum traders. And that will continue for the foreseeable future: The stock's volatility – up and down – is far from over.