Please ensure Javascript is enabled for purposes of website accessibility
Log In Help Join The Motley Fool
Free Article Join Over 1 Million Premium Members And Get More In-Depth Stock Guidance and Research
By Leo Sun - Feb 25, 2016 at 10:02AM

This newly merged chipmaker has plenty of tailwinds for 2016.

Last May, Avago agreed to acquire Broadcom for $37 billion in one of the world's biggest tech deals. Avago develops analog and mixed-signal chips for automotive, industrial, and communications purposes, as well as custom networking chips. Broadcom makes a wide range of radios for consumer devices and chips for data center networking equipment.

That deal closed in early February, and the new company was renamed Broadcom Limited (AVGO -0.94%). However, shares of Broadcom have slipped 10% since the beginning of the year due to its soft sales guidance for the first quarter, concerns about Apple (AAPL -1.80%) suppliers, and overall market weakness. But looking ahead, shares of the newly merged chipmaker could bounce back for four simple reasons. 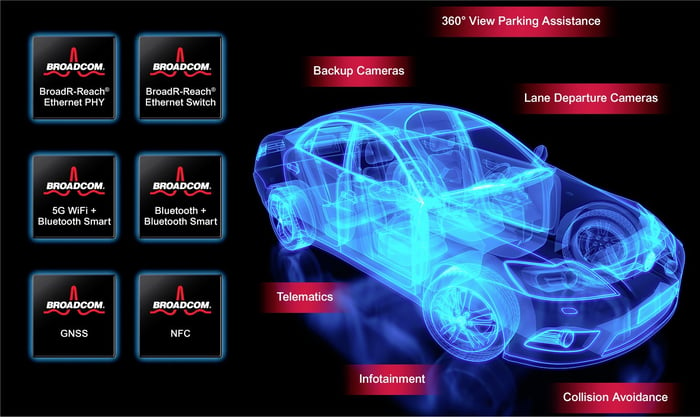 1. Economies of scale
Avago and Broadcom are both major Apple suppliers. Apple orders accounted for "more than 10%" of Avago's sales during the past few quarters and 14% of Broadcom's 2014 revenue. While the "new" Broadcom will still depend on Apple for a large percentage of its orders, merging the two companies' production capabilities can also lower production costs with economies of scale and boost its clout in price negotiations.

Broadcom estimates that the deal will generate $750 million in annual cost synergies over the next 18 months, and be "immediately accretive" to its non-GAAP EPS and free cash flow. Analysts believe that the merger will cause Avago/Broadcom's full-year revenue to spike 91.5% annually in fiscal 2016 and climb another 23% in 2017. Earnings are expected to rise 12% this year, 21% next year, and grow at an average rate of 17% over the next five years. That long-term forecast gives Broadcom shares a five-year PEG ratio of 0.75. Since a PEG ratio under 1 is "undervalued," the stock is cheap relative to its earnings growth potential.

That growth is impressive considering that telco spending on wireless infrastructure has been sluggish, and Apple's iPhone shipments only inched up 0.4% annually last quarter. By comparison, Avago's analog chip rival Texas Instruments (TXN 0.57%) posted a 30% decline in wireless infrastructure revenue in 2015 due to telcos investing in value-added ecosystem expansions instead of infrastructure growth. RBC Capital analyst Amit Daryanani estimates that TI's "Apple-centric revenue" will also fall about 30% annually this year.

But back in 2014, ARM declared that its designs could claim 10% of that market by 2017. Qualcomm's (QCOM -1.91%) recent entrance into the market could finally get the ball rolling, while Avago and Broadcom's broad portfolio of enterprise data storage solutions could convince existing customers to test out its Vulcan chips. While it's unlikely that Broadcom's chips will disrupt Intel's dominance of the market, it could become a niche stream of revenue for the newly merged company.

But mind the pitfalls
Although the "new" Broadcom has plenty of strengths, investors shouldn't overlook its weaknesses. Its exposure to Apple is a double-edged sword, its industrial growth remains weak due to macro issues, and it's taking on $9 billion in new debt to fund the merger. Therefore, investors should carefully weigh Broadcom Limited's strengths and weaknesses before picking up any shares. The company is scheduled to report its first-quarter earnings on March 3.