Operations are improving, but that may not be enough to save Caesars Entertainment.

As Caesars Entertainment (CZR) fights off creditors in court, its operating business continues to improve steadily. Las Vegas is leading the way, particularly on the non-gaming side, where visitors are now spending most of their money.

But this improvement may be coming too late for Caesars Entertainment. Next week a report on the company's asset transfers is due in court, and if that goes against the company it could still mean bankruptcy is on the horizon.

Las Vegas improvement continues
Before getting into the numbers, let's look at what we're talking about. Caesars Entertainment Operating Company (CEOC) is currently in bankruptcy, so the properties in green below are not included in these results. The properties included in Caesars Entertainment Resort Properties and Caesars Growth Partners -- partly owned by Caesars Acquisition Company (NASDAQ: CACQ) -- are included, also known as CEC. If the organization structure is confusing, you're not alone. This is the core of multiple Caesars court battles taking place today. 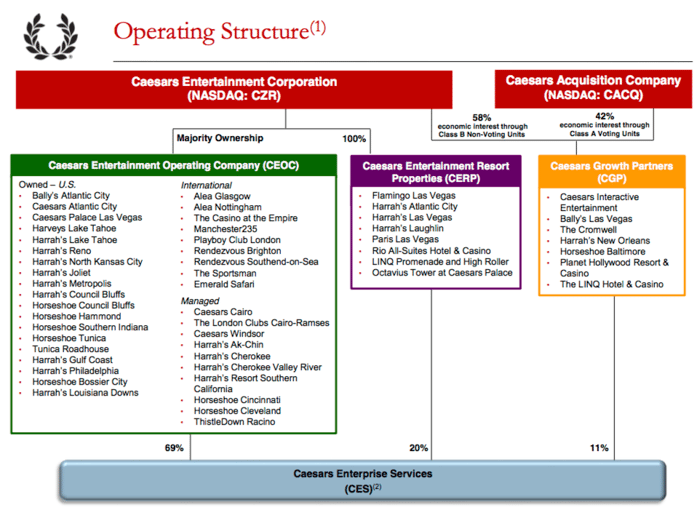 In the fourth quarter, CEC property revenue was up 9% to $1.12 billion and adjusted EBITDA rose 52% to $305 million. This was due to higher room rates, helped by resort fees, along with additions like The Cromwell and The LINQ, which cater to non-gaming activities. Keep in mind that these are also the "Good Caesars" assets that private equity owners wanted to keep within reach. The "Bad Caesars" assets in regional markets like Atlantic City, Iowa, and Indiana actually saw revenue decline slightly in the fourth quarter.

To continue the operational improvement, management is expecting to renovate 4,800 hotel rooms in Las Vegas this year and 5,700 enterprise-wide.

Another driver of growth was the CIE, a subsidiary that owns social and mobile gaming, regulated online gaming, and the World Series of Poker. That segment's revenue jumped 33% in the fourth quarter to $208 million and adjusted EBITDA was up 68% to $77 million. This was one of the key pieces Caesars Entertainment wanted to keep within its grasp when it created CEOC a few years ago.

This could still end poorly for shareholders
While the quarterly results were a big improvement from a year ago, they don't change the fundamental challenges for the company. An Examiner's report is due to court on Feb. 29, which will give the court a valuable opinion on whether or not management illegally moved valuable assets outside of CEOC creditors' reach before filing for bankruptcy. An unfavorable ruling could lead to bankruptcy for the entire entity.