Please ensure Javascript is enabled for purposes of website accessibility
Log In Help Join The Motley Fool
Free Article Join Over 1 Million Premium Members And Get More In-Depth Stock Guidance and Research
By Andrew Tonner - Feb 28, 2016 at 7:41AM

Like much of the rest of the market, shares of tech giant Apple (AAPL -0.14%) have been snake-bitten so far this year, and that's exactly why investors today should take notice. 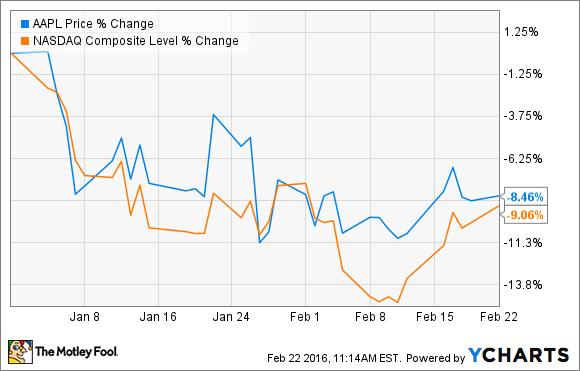 Despite its admitted struggles of late, ample historic evidence suggests Apple could in fact prove to be one of the most compelling buys in tech.

Thanks to the company's Hotel California-esque ecosystem and forthcoming iPhone 7, better days almost assuredly lie ahead for Apple and its investors. Equally importantly, the tech giant continues to delve deeper into key emerging markets like China and India, as yet another recent move demonstrates.

Apple Pay enters China
Late last week, Apple launched its eponymous mobile payment platform -- Apple Pay -- in China in an attempt to further its competitive position in its second-largest market by sales. The move makes China only the fifth nation to receive support for Apple's mobile payment service since its launch in late 2014. And though the market opportunity is undeniably compelling, Apple will assuredly face an uphill battle in establishing a foothold for Apple Pay.

First the good news: As with nearly everything else in China, the sheer enormity of the market opportunity for mobile payments is simply tantalizing. According to the China Internet Network Information Center, over 358 million users have already begun purchasing goods and services through mobile payments platforms in the PRC. For those scoring at home, that figure easily exceeds the entire population of the United States, though it represents a mere fraction of the overall Chinese populace. The bad news is that the bulk of those mobile payments occur through the country's two dominant payment platforms: Tencent's WeChat Payment and Alibaba's AliPay. As such, the jury remains decidedly out as to what degree Apple Pay will help expand the company's sales in the world's largest smartphone market.

But will it work?
The consumer response to Apple Pay in China will prove fascinating to watch since China is only the second mass market -- the first being the U.S. -- where an already thriving mobile payments environment exists.

Recall that Apple Pay's purpose isn't likely to drive any kind of financial result for the company. The company reportedly charges a mere 0.15% per transaction, a paltry enough sum to all but ensure it never becomes a profit center in its own right. Instead, so-called "flagship" features like Siri, TouchID, and Apple Pay aim to achieve two primary ends. First, on a device cycle basis, each one of Apple's new "flagship" features serves as a key point of differentiation between Apple's iPhone and other high-end smartphones, an advantage that often disappears after a device cycle or two. More broadly, Apple also uses these services to strengthen its ecosystem as a whole. The idea is that the more aspects of the user experience it can layer into its own app and software ecosystem, the better it can hold onto consumers in the long term.

While the ecosystem strength aspect of Apple Pay should still help it in China long term, the fact that many other mobile payments avenues already exist in China will create a fascinating case study of Apple Pay's actual appeal, and the ultimate outcome is anyone's guess. On one hand, Apple's brand remains incredibly popular among Chinese consumers. Its high-priced hardware is largely still viewed as a status symbol. Banking on Apple's broader brand strength, Apple Pay could enjoy a halo effect of sorts among Chinese consumers.

At the same time, though, between a weakening economy and popular pre-existing competitors, there's a fair case to be made that Apple Pay doesn't necessarily offer anything new. So, while we're early on in this storyline, it could prove a fascinating sub-plot for Apple investors to watch in the months to come.