The biotech sector as a whole has been out of favor for several months now, which has caused the stocks of even the strongest and most successful companies in it to plunge. Consider Alexion Pharmaceuticals (NASDAQ:ALXN), a highly profitable and fast-growing company that specializes in treating orphan diseases. Alexion continues to grow at impressive rates, and it has exceeded analysts' estimates for three quarters in a row -- yet its shares have declined more than 34% from their summertime highs.

Could that mismatch represent a buying opportunity? Here are five charts that suggest that the answer is yes.

1. Alexion has a long history of winning
Alexion's investors have enjoyed a remarkable run over the past decade. Shares are up an astounding 1,400% over the past 10 years, which has left the returns of both the S&P 500 and biotech stocks broadly -- as measured by the SPDR S&P Biotech ETF (NYSEMKT:XBI) -- in the dust. 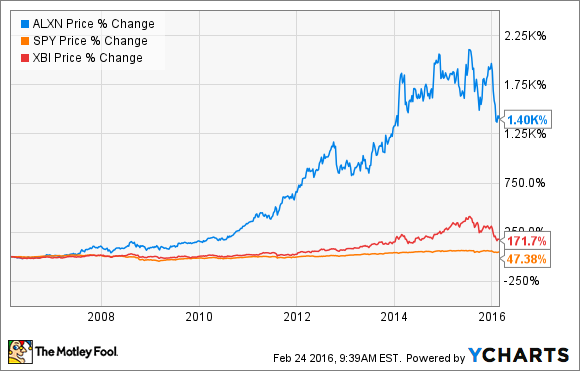 While a great history of outperformance isn't enough of a reason to purchase shares, it's certainly a good starting point for your consideration. After all, strong past price appreciation is one of the 6 signs of a "Rule Breaker" that Motley Fool co-founder David Gardner uses to identify potential winners, as it hints that the company is doing something right to capture the market's attention.

2. Revenue has grown significantly
Alexion has outperformed the markets so handily over past few years due to the success of Soliris, a treatment for two ultra-rare blood disorders: paroxysmal nocturnal hemoglobinuria (PNH) and atypical hemolytic uremic syndrome (aHUS). While both of these diseases are extremely rare, Alexion is able to charge an exorbitantly steep price tag for Soliris -- around $500,000 per year per patient, making it the most expensive drug in the world -- that has allowed the company to produce billions in revenue and hundreds of millions of dollars of profits. 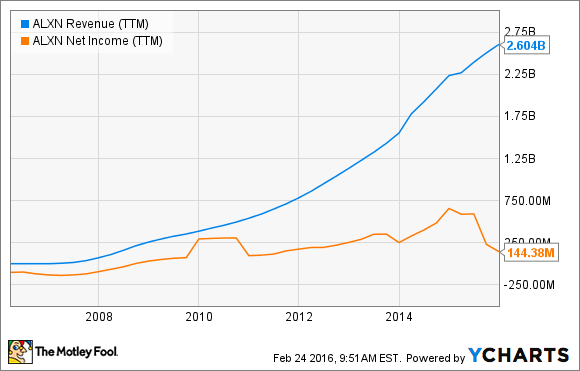 In the last five years alone, Alexion's top line has shot up more than 340%, which has been a major driving force pushing its stock higher.

3. The good times should roll into 2016
2015 was a pivotal year for Alexion, as it won regulatory approval for two new drugs -- Kanuma and Strensiq -- that should help the company maintain its torrid growth rate, as well as diversifying its revenue base.

Kanuma is the company's new enzyme replacement treatment for lysosomal acid lipase deficiency, or LAL-D, a life threatening disease that causes excessive buildup of cholesterol esters and triglycerides in organs. Strensiq, also an enzyme replacement therapy, treats hypophosphatasia, or HPP, an ultra-rare metabolic disease that causes defective bone mineralization. Analysts expect that both of these drugs will be meaningful contributors to revenue in future years, and have predicted that their combined peak sales will exceed $1.7 billion.

Without any time to ramp up, sales of Kanuma and Strensiq were tiny in 2015 -- just over $12 million -- but Alexion believes both are positioned for strong growth in the year ahead. Management forecasts that combined sales of these drugs will be between $150 million and $175 million for 2016. When that's combined with the continued growth of Soliris, the company is expecting another year of strong top-line growth. 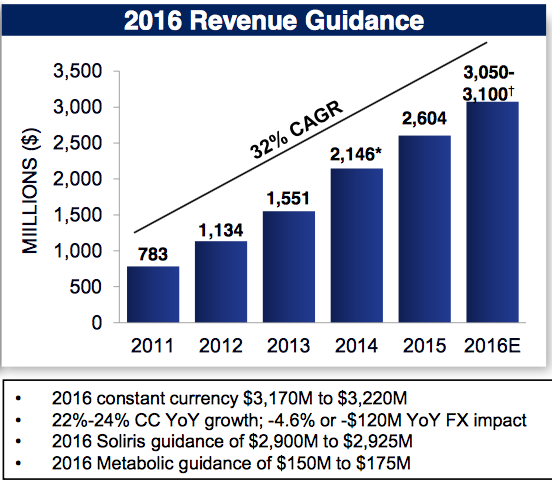 4. A pipeline packed with potential
Alexion has invested heavily in building out a strong pipeline that should deliver both new products and additional labeling for its current treatments over the next few years. Investors should be especially interested to know that Soliris is currently in late-stage trails for four new indications. If Alexion can win regulatory approval even a few of them, its revenue growth should continue at impressive rates. 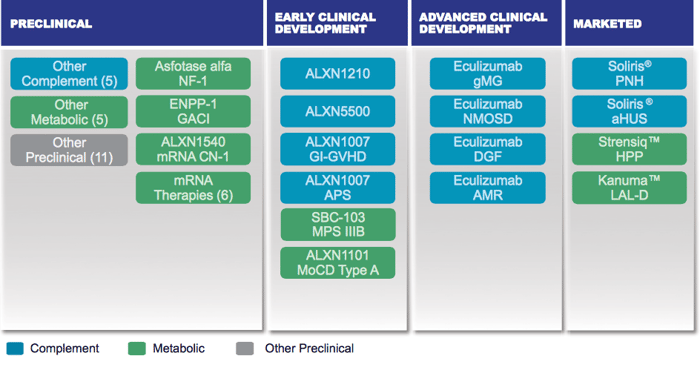 5. Alexion's stock still isn't cheap
The market has long awarded Alexion's stock a premium price tag thanks to its terrific growth prospects, and even after its recent pullback, its hard to call the stock cheap. Shares are currently trading for more than 11 times sales and more than 170 times trailing earnings. 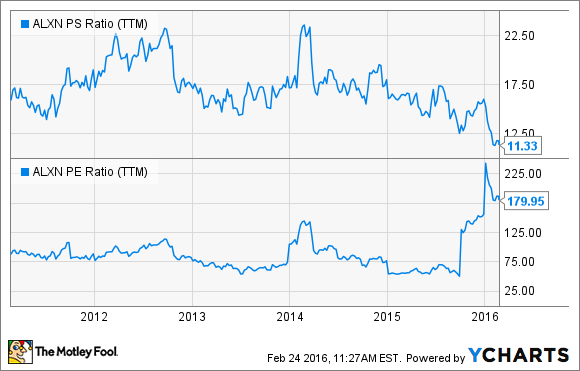 Still, just because a stock is priced at a premium doesn't mean that it can't offer investors terrific returns from here. After all, shares looked expensive five years ago when they were trading at more than 15 times sales and with a P/E over 80, yet if you had bought in then, you'd be up more than 200% now --  a return that, once again, crushes both the S&P 500 and the XBI over the period.

Looking forward
If all goes according to plan, then management predicts that revenues will grow by at least 17% in the coming year, landing between $3.05 billion and $3.1 billion. Profit growth is expected to be muted by currency issues, as well as a planned increase in spending to advance its pipeline, so earnings are expected to come in between $5 per share and $5.20 per share. Based on those figures, the company's stock is currently trading hands for roughly 27 times forward earnings, which is a premium price tag that anticipates a lot of future growth.

That sounds reasonable, but investors should know that Alexion is far from a risk free investment, especially with many presidential candidates rallying against the sky-high cost of drugs and calling for reform to curb spending. It's possible that Alexion will come under pressure to significantly lower its prices, which could throw a huge wrench in Alexion's long-term growth plans.

Still, with so many positive developments working in the company's favor, I think that Alexion's shares are worth the risk, especially after the recent sell-off.