Please ensure Javascript is enabled for purposes of website accessibility
Log In Help Join The Motley Fool
Free Article Join Over 1 Million Premium Members And Get More In-Depth Stock Guidance and Research
By Daniel Miller - Feb 29, 2016 at 9:20AM

The DJIA and S&P 500 posted gains -- here are a couple of highlights from individual companies making moves. 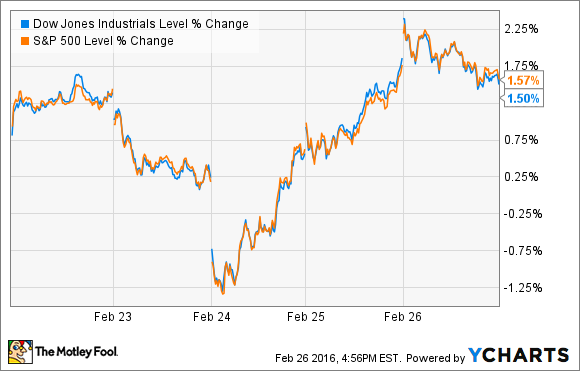 Economic data was a mixed bag on Friday as the markets tried to hold their weekly gains. On the one hand, gross domestic product, a measure of the goods and services produced across our economy, increased a seasonally adjusted annual rate of 1% during the fourth quarter, which was a revision above last month's 0.7% estimates. On the flip side, a revision to consumer spending estimates showed spending was slower than previously expected during the holiday season -- revised to 2% from 2.2%.

With all the dreary economic numbers out of the way, there were some stocks making big moves during the week. Here are a few highlights. 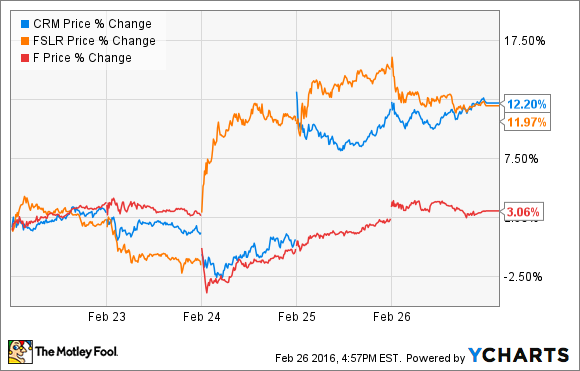 So bright!
Shares of First Solar (FSLR 0.03%) were on fire, trading about 12% higher as one of the best performing stocks in the S&P 500 for the week. One reason for its outperformance was that it posted a solid fourth quarter.

Quarterly revenue checked in at $942 million with earnings of $1.60 per share. It was a solid 2015 for the company as well, with revenue at the high end of guidance at $3.6 billion, while earnings topped guidance with $5.37 per share.

Beyond the top and bottom line performances, the company also posted a book-to-bill ratio above one, which is a good sign for growth in the near-term. More specifically, the company's bookings for 2015 checked in at 3.4 GW, and its shipments for the year were 2.9 GW. In addition, First Solar's potential booking opportunities moved from 2.9 GW to 20.3 GW.

And investors shouldn't have to worry much about First Solar cutting its revenue guidance. Congress passed a multi-year extension of the Solar Investment Tax Credit beyond December 2016. That is great news for First Solar in the long run, but due to the extension, it reduces demand in the immediate future as the cutoff deadline for the tax credit is no longer looming.

Salesforce provides hope
Salesforce.com (CRM 1.92%) tracks its business in a non-calendar fiscal year, and that set the stage for investors heading into the company's fiscal 2016 fourth quarter results, which extended through January, a month during which some technology companies witnessed industry weakness. When Salesforce.com topped quarterly revenue expectations and raised its full-year revenue guidance, it provided some technology investors with hope.

Looking at the details, Salesforce.com reported fourth quarter revenue of $1.81 billion, a 25% year-over-year increase. Adjusted earnings checked in at $0.19 per share. Part of the strong quarterly results was driven by the company's 600 seven-figure plus deals and its first nine-figure deal -- encouraging numbers that indicate near-term growth should remain strong.

As previously mentioned, the company also gave investors impressive fiscal 2017 first quarter guidance with revenue expected to come in between $1.885 billion and $1.895 billion and adjusted earnings of $0.23 to $0.24 per share. That compares favorably to the analyst consensus of $1.86 billion and $0.21 per share, respectively.

F-150 back on top
The good news continues for the folks at the Blue Oval, which last month posted record profits for 2015 -- despite a stock price that continues to falter amid "peak auto sales" fears in the U.S. market. Ford Motor Company (F 1.71%) started the week off on a positive note as Consumer Reports' Annual Top Picks named the Ford F-150 as the top pickup truck for the first time in 17 years:

By eschewing traditional steel body panels, Ford created a pickup that weighs less, enabling it to be quick off the line and fuel-efficient. The cabin is extremely quiet and spacious. The intuitive Sync 3 infotainment system is a welcome update from the MyFord Touch. The F-150 has the best predicted reliability of any domestic truck.

That's good news for the company's most profitable model, which drives a major portion of the company's North American profits and generates luxury-like sales, often above $50,000 per unit. In an ultra-competitive auto industry, where a fraction of a percent of market share is extremely valuable, publicity and awards such as this are a nice bonus for automakers.