What: Shares of Keryx Biopharmaceuticals (NASDAQ:KERX) gained more than 20% in early morning trading today due to an upgrade from FBR Capital. The firm upped Keryx's stock from market perform to outperform and increased its 12-month price target to $10.00 -- implying that the stock may have a staggering 250% upside from current levels.

So what: According to data provided by S&P Global Market Intelligence, Keryx's shares have now lost over 70% of their value since the company launched its first approved product, Auryxia, a drug used to control high serum phosphorus levels in patients with chronic kidney disease on dialysis. 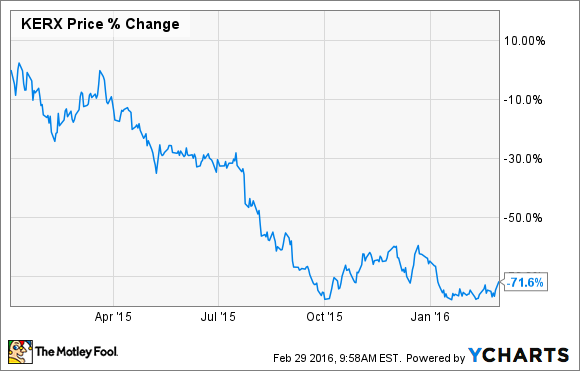 Despite high expectations for the drug prior to its launch, Keryx stated in its fourth-quarter earnings release that Auryxia's annual sales should come in at a meager $34 million -- on the high end -- this year. In light of these weak sales figures, it's becoming increasingly clear that Auryxia is failing to steal market share from Sanofi's (NASDAQ:SNY) market-leading drugs Renagel and Renvela, which together raked in over a billion dollars in sales in 2015.

Now what: FBR's renewed optimism seems to stem from the potential label expansion for Auryxia in pre-dialysis patients with iron deficiency anemia. As the drug's late-stage trial for this indication is on track to report top-line data in the second quarter, Keryx could have a regulatory filing submitted to the FDA by the third quarter of this year.

While that's good news for long-term shareholders, this potential label expansion probably won't make a material impact on Keryx's bottom or top lines in 2016. So, with this small-cap biopharma still losing money due to Auryxia's failure to cut into Sanofi's dominant position in the hyperphosphatemia drug market, investors may want to be cautious about jumping into this speculative stock on this analyst upgrade.